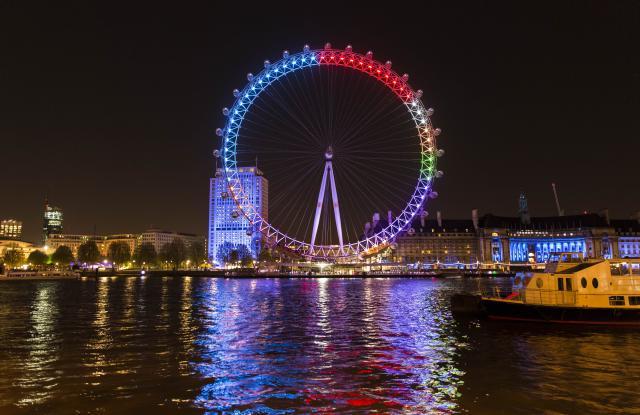 If you're wondering why the London Eye looked a bit multicoloured last night, it's because it was showing a giant, pie-chart-like visualisation of how people are talking about the election on Facebook — and it'll be displaying different things each night up to (and including) the election on 7 May.

Interestingly, UKIP is apparently the main party talked about by people in Uxbridge and South Ruislip, where Boris Johnson is standing, and Holborn and St Pancras, where Natalie Bennett is standing.

If you want to know what you're looking at on any given night, this is what the Eye will be displaying:

The light show starts at 9.30pm each night (so a bit early for the 7 May surprise to be the exit poll), and has been created by Bompas and Parr. Sam Bompas said:

"During the last election we created the Parliamentary Waffle House, an election-themed eatery featuring a food based swing-o-meter. For 2015 we are delighted to use the huge volume of Facebook conversations about politics to create an inspiring installation that we hope will encourage people to have their say — on Facebook and at the polls on 7 May."