American Dream Turns To Nightmare In Death Of A Salesman 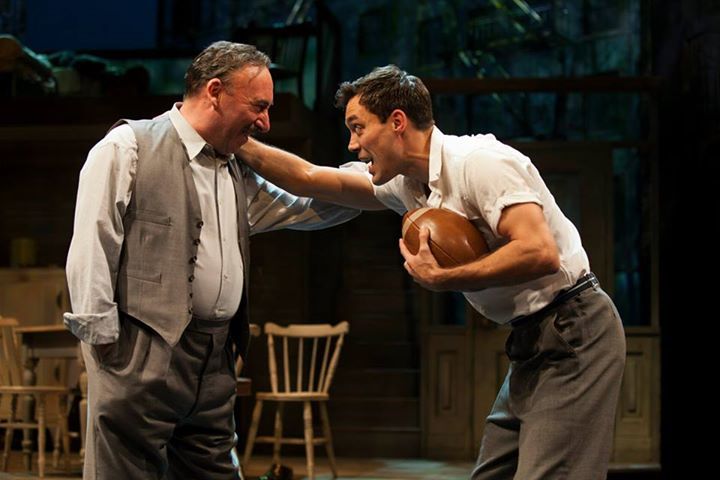 Marking the centenary of Arthur Miller’s birth, the Royal Shakespeare Company brings its revival of his greatest play Death of a Salesman from Stratford-upon-Avon to the West End. Although this is very much the personal tragedy of a deeply flawed individual and the impact his false hopes has on his family, it’s also a crushing critique of a consumer culture where “Everybody is selling and everything is for sale”. This is the American Dream turned into nightmare.

After 36 years of “riding on a smile and a shoeshine”, travelling salesman Willy Loman is a spent force. Now his salary has been taken away he survives just on a diminishing commission, so his concerned wife Linda wants him to ask for a desk job in the New York office. Meanwhile, estranged elder son Biff has returned to their Brooklyn home after drifting in Texas, and is persuaded to seek a sales job with an ex-employer. Willy’s hopes are cruelly raised again as his overstrained mind constantly reverts to ‘the good old days’ when anything seemed possible, though flashbacks reveal the sordid reality behind his delusions.

Miller superbly captures the pathos of a man who has lived most of his life in denial and whose refusal to face the truth causes a complete mental breakdown. Willy is a failure with suicidal thoughts who has pushed his wife to the limit and alienated both his sons, but he still thinks he’s a big shot whose luck will change. The play moves seamlessly between present and past, as Willy’s rose-tinted memories of former glories and in fantastical conversations with his idealised rich older brother Ben are exposed as the mutterings of a sad old man. But Miller makes clear that although Willy lets his family down he is also a victim of the capitalist system itself.

Gregory Doran’s powerful production gets a grip on the multiple realities of Willy’s disintegration leading to a devastatingly emotional finale. Stephen Brimson Lewis’s densely urban design of apartment-block façades and external stairways reinforces how ‘boxed in’ the Loman family is with a small yard where nothing grows, while Tim Mitchell’s striking lighting effects demarcate the different times and moods of the play.

As Willy, Antony Sher gives a totally convincing portrayal of a man at the end of his tether who is not only losing his pride but his identity, as his consciousness flickers almost like dementia, his present world-weariness contrasted with past energetic confidence. Harriet Walter also gives a moving performance as the stoical, fiercely loyal Linda who vainly tries to bolster her husband. Alex Hassell’s self-conflicted, fading athlete Biff has dropped out after becoming disillusioned with the father he previously hero-worshipped, while as his “philandering bum” younger brother Sam Marks’s Happy is living a lie, just like Willy.

Death of a Salesman is on at the Noël Coward Theatre until 18 July. Tickets are £12.25–£71.75. Londonist saw this production on a complimentary ticket.