The streets of North Finchley are the inspiration for Anya Beaumont's new exhibition The View from Here. The artsdepot show features delicate paper cutouts, including a huge map of the area to which visitors can contribute. Below, Anya talks us through her beautiful, thoughtful creations.

In "The View from Here" I am presenting works from an ongoing series based on areas that, like much of London, grew up during the industrial and housing booms at the end of the 19th and the early 20th century. Over time slum clearance, bomb damage and civic improvement has meant that parts of these places have been destroyed and other buildings, often in very contrasting styles have been erected to provide necessary accommodation. The resulting tension between social need and design is a point from which much of the work in the exhibition stems.


Using pre-used paper that I have collected from the area I'm working on, I create delicate paper sculptures made from my observations of architectural features in the locale. For instance, Retrace (above) is made from a great many hand-cut photographic images of window tracery found in Tottenham. I like to use paper from the area as it has traces of its previous use there. I like the contrast of an ephemeral material like paper when thinking about something we consider to be sturdy and long-lasting, such as buildings.

Often when a sculpture is finished I take it back to the area which inspired it and place it in a contrasting situation to photograph. Keep (below) is an example of this.


A similar sculpture to Retrace was placed in front of a very different window (a 1960's factory) for the photograph. Not content with just a flat surface of the resulting print, though, I overlaid a second-hand cut layer to make a raised 'relief' on the work. I call these 'photo-reliefs' rather than 'photo-sculptures' a term which I use for the original paper sculptures. Some of the 'photo-reliefs' in the exhibition took almost as long to make as the originals.

Other images, for example Library Window (below) are high quality photographic prints of some of the original sculptures sited back within the area that inspired them. My interest here is in the similarity and/or contrast with a specific site. In Library Window my sculpture looks almost frivolously ornate against the pared-down modern building, but the pillars in the library echo its form and the colours used on the library fascia are also similar. 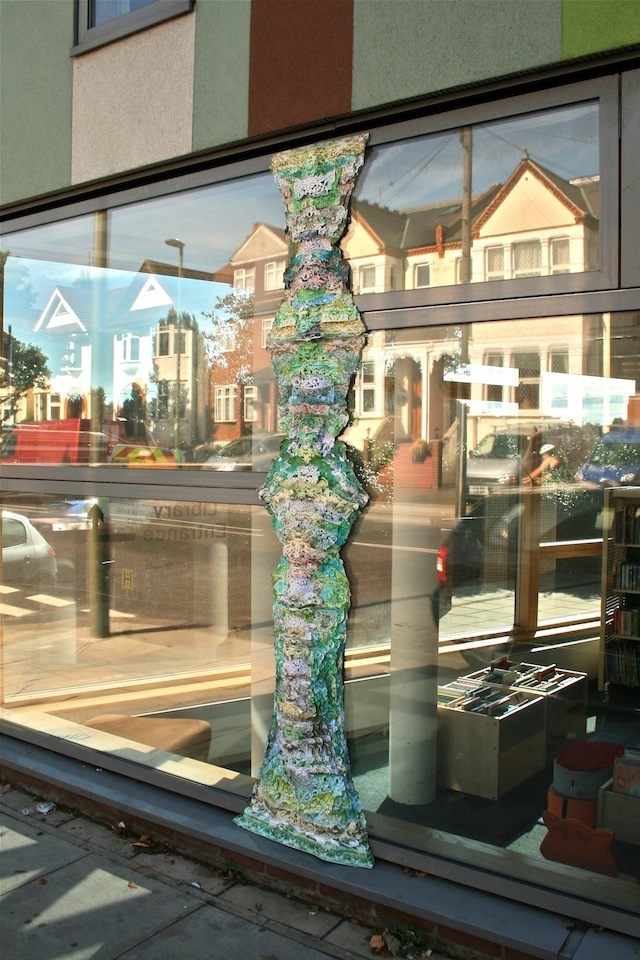 I am (still) making the map of North Finchley especially for the exhibition, again using pre-used paper from the area. When complete it will extend to about 8m at its longest and cover the streets in and around the convergence of the High Road and Ballards Lane where the artsdepot is.


I am only making the streets for this map, but on the streets in amongst the coloured paper (old artsdepot fliers, scrap from the library and local schools) I am including intricate hand-cut architectural features of the same sort that my other work has developed from, such as decorative stone work, embellished gable ends and wrought iron fencing. There are a surprising amount of ornamental pineapples and lions in North Finchley!

I try and site these features approximately where I find them, although I need to ensure a flow through the work so some artistic licence is used. However, if you were to know a particular street, or even visit one after seeing the work I'm sure it would be possible to recognise the features.


When the work is installed in the gallery and throughout the duration of the exhibition, visitors are invited to add to the map. If they are local and their street is on the map then they could make a drawn/collaged representation of their house, or a friend's house. Alternatively they can customise pre-prepared figures and put themselves on the map. Or their car, or dog, or bicycle! I will be there facilitating this every day the exhibition is open.

The View From Here is at artsdepot, North Finchley, 24-30 May (closed 25 May). Entrance is free. See more of Anya's work on her Facebook page, and follow on Twitter @AnyaBeaumont.