By Will Noble Last edited 75 months ago
Will Noble What's It Like Spending 19 Hours On The Tube?

Early one morning, Londonist turfed itself out of bed at stupid o'clock, caught a string of night buses to west London and joined in with an attempt to visit all 270 Underground stations in a day. Here's what we learned. 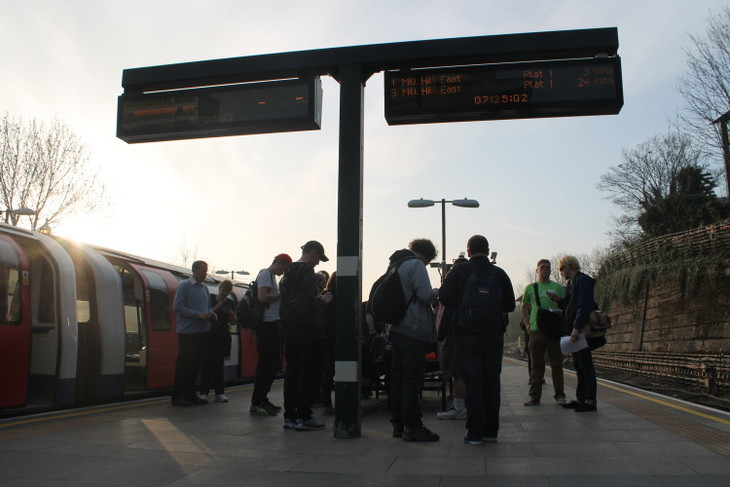 2. Even though you've got to have a route planned, you can count on that route going out of the window almost immediately. One second you're dozing off on the District line, the next you're sleep-jogging through the backstreets of west Kensington. The organisers of Walk the Tube have the improvisational skills of Dizzy Gillespie: they can riff off any given signal failure, line closure, engine breakdown, driver shortage, person under a train or anything else the network hurls at them. And today the network is throwing a proper strop.

3. There's no point pretending you know anything about the tube, not considering present company: Geoff is a two-time world record holder for getting round the network in the fastest time; Jack has a walkie-talkie with a direct line to TfL's CentreCom and knows everything that's going on 10 minutes before it's announced to the hoi polloi; David had his bathroom done out in the same tiles they used for the Edwardian era King's Cross. Simply knowing how to pronounce Theydon Bois doesn't cut the mustard here, mate.

5. When you're trying to cover the entire tube map, you forget you're in London altogether. Instead, it's like you're in some immersive computer game, where you've got to blank out all the different coloured lines before the clock winds down. Half the time it's such a blur, you don't even know where you are. When  you're being led at speed by experts, you essentially assume the role of lemming. You could be bundled aboard the Eurostar and not even notice something's up till Ashford whizzes by.

6. There are far more toilets on the tube network than you might think — a relief when you're slogging around the circuit for the best part of a day. In west and central London you're more likely to have to fumble for shrapnel. In the east, you rarely have to pay. Hold that bladder until West Ham if you can.

7. Cockfosters is still funny when you get there.

8. Riding the tube is generally a solitary experience, so it's quite something to do it in a group of 20. It's also the only ever time that (sober) strangers will strike up a conversation with you, asking what you're up to. Talking to people on the Underground is pretty liberating; what John Hannah must have felt like in Sliding Doors.

9. North Acton station is so bloody bucolic, TfL should consider hiring a Bernard Cribbins lookalike dressed as a porter, to complete the picture.

10. No one but no one can get in the way of the challenge. Arriving at Rayners Lane, a rumour surfaces that Boris Johnson has literally just left the building. A small group flies out of the gates to pursue the Mayor, while the rest head down to the platform to wait for the connecting train. Two minutes later the search party returns. Boris has agreed to talk to us; he's waiting at the station entrance. Just then, our train pulls in and we all get on it, leaving the Mayor of London waiting for a group of people who are never going to turn up.

11. Realising you're not going to reach all 270 stations is mildy gut-wrenching. Some people won't take no as an answer though; a group quickly calling themselves the 'Gunnersbury Four' arrange for a driver to be waiting for them outside Chesham, from where he'll whisk them down to Gunnersbury and they'll attempt to complete the missing nub of track on the last train of the night. It's like listening to The Great Train Robbery being planned out. They make it too, the bastards.