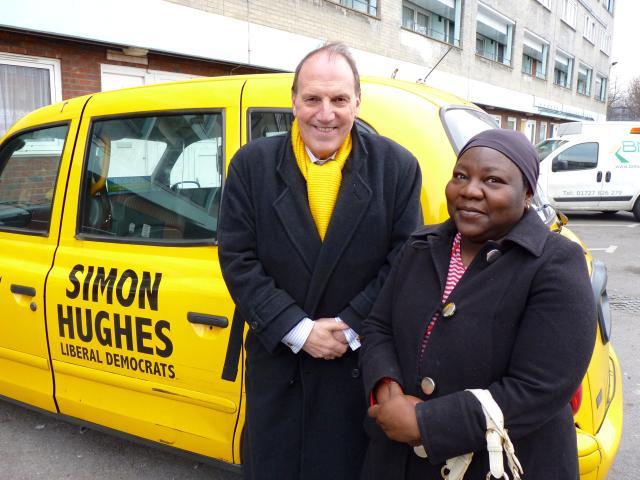 Simon Hughes's constituency office is packed, despite it being the middle of a Thursday afternoon. Liberal Democrat helpers stuff leaflets into envelopes, others are trying to chivvy more volunteers by phone. Gardens around Bermondsey are sprouting yellow posters like they're sprouting plants — the party has clearly been busy. And no wonder: the Lib Dems are going to have a rough ride in this election from voters who still can't forgive them for going into coalition with the Conservatives in 2010.

You know it's bad when Hughes, who has represented Bermondsey and Southwark in its various guises since 1987, is under threat. A Lord Ashcroft poll in September put Labour just one point behind Hughes, who won with a 19% majority last time around. "All Liberal Democrats are having to defend being in government and making difficult decisions," he concedes. "We have to defend the fact that in the national interest we acted against our own logic" — then he quickly corrects himself — "political history and did a deal with the Tories who are not our natural political allies. We did it because Labour plus us wasn’t a majority. We could have let the Tories run the country on their own and we would have been blamed even more, I think, if we’d let in a minority Tory government who’d then called an election and won a majority."

Lynne Featherstone, who looks to be in an even more precarious position in Hornsey and Wood Green, describes the Lib Dems as having had "a right slapping from the left and the right". She laughs as she says it, but she's not really finding it funny. "And I don’t know why, because in the end if you look at what the coalition has done, not only have the Liberal Democrats stepped up to the plate in terms of the economy, but if you look at the sort of things we’ve achieved in government they’re all the bits that people really like." Such as? "The raising of the tax threshold, renewable energy, restoring the earnings link for pensions, apprenticeships."

Hughes cites the lowering of the unemployment rate, particularly on his home turf. "This constituency used to be right at the top of the league table for unemployment. It's under 6% now," he says. We refer to recent Office of National Statistics figures showing 9.9% of UK workers were underemployed in 2014, implying that some of these new jobs aren't providing the kind of support that people need. He accepts the point, but insists "there are still more women in work, more people in work". Featherstone continues the theme: "There is still some part time work and around 2% on zero hours contracts, but around 80% are full time jobs. Of course wages have been suppressed and depressed but now they’re beginning to rise above inflation." 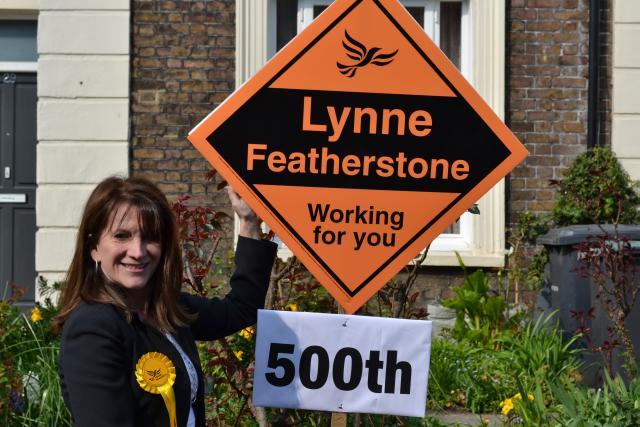 This is clearly the message the Liberal Democrats are trying to push out: that 'honestly guys, we haven't done all that badly and on some things we've done rather well'. But the national backlash is clearly hurting. "This is the first time I’m defending the seat from being in government," says Hughes, as he describes the influx of Labour supporters into Bermondsey. The constituency is surrounded by safe Labour seats and Miliband's crew are determined to take him down. "Labour had 100 target seats when Blair came to power; they won 98 of them, they didn’t win this," he says. "We’re fighting it as if it was a by-election, as are my colleagues across London."

Featherstone is also in combative mood. An Ashcroft poll from September put her 13 points behind Labour, but the Lib Dems recently asked polling company Survation to poll voters again. "It put me on 36%, Labour on 37% and Conservatives 15%. So clearly the momentum is with us and it’s too tight to call, really." Both Hornsey and Wood Green and Bermondsey and Old Southwark genuinely are places where every vote counts.

And yet, not all London Lib Dems are fighting for their lives. Take Sutton and Cheam, for example. In last year's council elections, when voters across the country were giving the Liberal Democrats a proper shoeing, they gained two seats on Sutton Council, which they control. How does that even happen?

We go canvassing door-to-door with Paul Burstow, who's been the MP here since 1997, and it quickly becomes apparent that the Lib Dems are doing well on the local level. Almost everyone who answers the door recognises his face (we wouldn't know our outgoing MP if we fell over her in the street). One man pledges instant support because of Burstow's campaigning to save St Helier Hospital's A&E and maternity units, another recounts how he made her collapse in fits of giggles during a bongo playing session. Around three-quarters of people we speak to say they will vote for him ("you'll think we set this up," he says), even a woman who would normally vote Labour and describes herself as "disappointed" with the coalition, but accepts the reality that Labour don't stand a chance around here.


Burstow isn't taking anything for granted, though; and with a 3.3% majority, he's right not to. "There are some people who have issues and we have a conversation with them if we can. The tuition fee issue comes up; it doesn’t come up that much but it’s there. But there’s a lot of positive support, they appreciate what I’ve done as an MP, what I do in the area." The Lib Dems have been in control of Sutton Council since 1990 and it seems like people's general satisfaction with their local area will be enough to override national concerns. Schools, in particular, have won people's approval.

Both Hughes and Featherstone are also pinning their chances on their local reputations. Featherstone mentions her campaign against closing the Whittington's A&E and Hughes is lively when talking about the need for affordable housing. "Ever since I’ve first been an MP, which was a long time ago, the biggest issue that people have asked me to help with has been housing," he says. He excoriates (Labour run) Southwark Council for falling short on affordability targets, particularly at the Heygate Estate. We all know there's a severe problem with housing in London so what, we ask, are his solutions?

He wants London to return to a target of having 50% of London's new build as affordable housing, which Boris Johnson ended in 2008, and lift restrictions that prevent councils borrowing to build. He also wants developers to be required to publish their viability assessments before councils grant (or deny) planning permission. "A viability assessment is the basis for developers' negotiations with the council," he explains. "I have a friend who has been exposing, serially, various developers who’ve told the council ‘the figures work out like this, because we think the amount we’ll get for the sales is X’ while simultaneously they’ve been advertising them abroad for Y, which is higher. I want the developer to have to publish the viability assessment before things go to the planning committee, they have to show the workings and the finances. Absolutely that will drive up the amount of affordable housing because developers won’t get away with it. They’d have to face public opinion and councillors wouldn’t be able to vote for it."

The Liberal Democrats, like the other parties, have a commitment to build more — they promise 300,000 affordable new houses a year. That figure is national, but Hughes says 50,000 or 60,000 homes a year could be built in London. He also mentions other national policies, like the Rent to Buy proposal ("it’s a bit like a further expansion of the shared ownership scheme") and is scathing about the Tory plan to extend Right to Buy to housing associations ("it’s a flawed policy because it depends on councils selling off their housing stock to fund it and there’s no guarantee it would be a like for like replacement. I can’t imagine we’d sign off on the proposal as presented"). 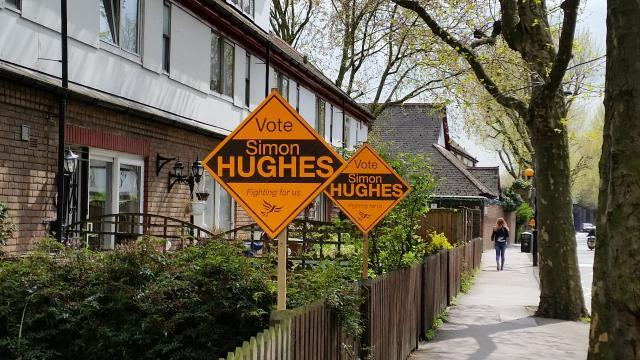 When we meet Hughes, it's the day after the manifesto has been released so it obviously comes up. We tell him we find the 'neither left nor right' positioning quite cynical, presumably designed so the party can easily slip into coalition with either Labour or the Conservatives. "You’re the first person to have said that and I don’t accept it," he says. "It’s not a manifesto that’s based on where other people are." Obviously he has to say this, but to us it feels like a party that's very wary of having outlandish promises come back to bite it (Greens, beware).

Featherstone is more bullish, saying: "If I could just get people to really see what we’ve done in government, we’re a party who couldn’t be more different. We have managed, in the teeth of the Conservatives if you like, to get through things that really are liberal and different. There's my own work on same sex marriage and FGM, and also the pupil premium, which is money that goes on the head of every child from a disadvantaged family into their school. Do you really think the Conservatives or Labour would have come up with such policies and driven them through?"

That message isn't getting through to the electorate, however; or the electorate isn't interested. The New Statesman's election website, May2015, is currently showing the Lib Dems polling nationally at 8% in its poll of polls. UKIP are polling at 14%. Could this explain what appears to be a new lack of enthusiasm for electoral reform, given that true proportional representation would — on those numbers — give UKIP more seats? "The Alternative Vote referendum didn’t go far enough," concedes Featherstone, "but it’s all we were able to negotiate last time with the Conservatives. We want a proper proportional system. Funnily enough, my constituency is one of only two constituencies in the country who voted for it!"

"I don’t think there’s an appetite for another referendum on voting reform in the next parliament," continues Hughes, somewhat reluctantly. "People want us to finish sorting out the economy, they want the money for the health service. I sense that lowering the voting age is popular and we will continue to argue the case for PR and representation that’s fair, but I think it will happen at a local level in England first."

Given that electoral reform was the Liberal Democrat's major requirement from the coalition in 2010, and it now seems to have been beaten out of them, what would they insist on from negotiations in 2015? Those conversations haven't been had yet, says Hughes, but says his personal 'red lines' are a commitment to upholding international human rights and maximising affordable housing. We suggest to Featherstone that Labour want to overturn the bedroom tax and the Health and Social Care Act; would the Lib Dems go along with dismantling policies they helped enact? "The political posturing around ‘we will abolish it’ I find quite hard," she says. "That will be part of the negotiation if and when we find ourselves in coalition with Labour." It's going to be an interesting few weeks.