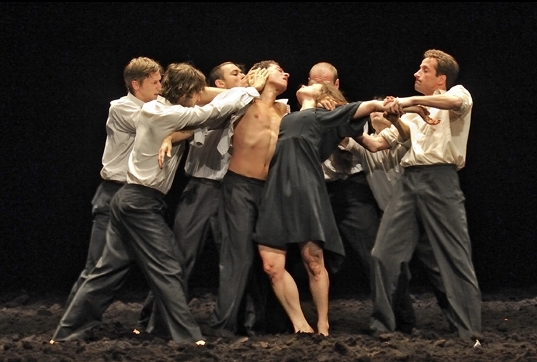 The return of Tanztheater Wuppertal Pina Bausch to the Sadler's Wells stage is like a reunion with old friends — some very talented old friends. There's Azusa Seyama balancing upside down; husky-voiced Nazareth Panadero shouting lustily atop a chair; tiny, nimble Ditta Miranda Jasjfi hopping through the mud. Ah, yes, the mud — this year's stage-enhancing prop is 10 cubic metres of soil imported from Germany, turning the theatre space into something between a peat bog and a WWI trench.

Auf dem Gebirge hat man ein Geschrei Gehört (on the mountain a cry was heard) can in many ways be read as a companion piece to that presented by the company at Sadler's last year — 1980. That was a poignant play, mourning loss by celebrating life: childlike games and summer picnics played out upon a lush green lawn. This time the stage is filled with bare earth and the imagery is funerary, although largely as applied to inanimate objects: a man blows up balloons only to pop them; a woman buries a chair in the soil; Christmas trees litter the stage like fallen comrades. Meanwhile, the living bodies on stage are subjected to a series of ritual torments and humiliations: exposure, corporal punishment; forced intimacy.

If that makes Auf dem Gebirge sound like a gloomy prospect, nothing could be further from the truth. Bausch was the mistress of the tragicomic, and there are many laugh-out-loud moments to be found in the deliberately absurd imagery. The soil plays host to a range of whirling activity: running, swimming, rowing, somersaults and cartwheels, and there's nothing dour or dismal about any of it. There is, however, an underlying tinge of grief and tumult to the whole enterprise, as Bausch's dancers joyfully embrace their earthy misery.

At a mere two hours plus interval, Auf dem Gebirge is one of the German choreographer's more compact works. If you haven't experienced the very particular theatrical magic of Tanztheater Wuppertal yet (and if you can get a ticket) this is a good place to start.