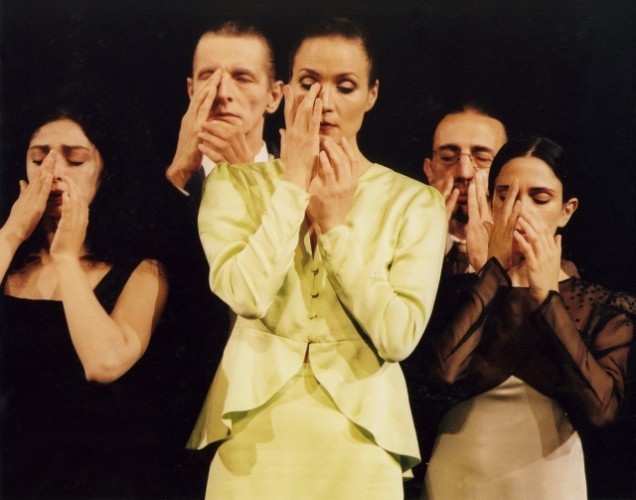 Other artists may correctly be described as 'influential' – choreographers who used their art to bring new steps, new shapes or new subject matter to the stage. Perhaps more than anyone else working in the field of dance, however, Pina Bausch used her art to create imaginative worlds that don't connect with so much as completely immerse their audiences. This year's treat for Bausch-lovers is the rarely-revived 1980, a joyfully poignant reflection on love and loss.

As ever with Bausch's works, there is no narrative as such. Instead, a dazzling array of processions, rituals, childhood games, spoken-word vignettes, bursts of ensemble gesture and occasional song parade across the stage for almost four hours. Those who have not encountered Bausch's work before may think that four hours sounds like a long time; those who have will know that it passes in a heartbeat.

The first thing you'll notice is the grass. For 1980 the company has turfed the entirety of the Sadler's Wells stage, and a definite meadow-scent permeates the auditorium. This turf becomes the site for picnicking, sunbathing, games of chase and hide-and-seek, and a myriad other activities that sometimes belong on grass. The second thing you'll notice is the sheer mass of performers; unlike Bausch's solo-heavy later works, 1980 is very much an ensemble piece, with a riot of activity taking place at any moment.

While working together as an ensemble, the cast members remain individuals and are encouraged into a series of gentle confessions by  longtime company member Lutz Förster. What are they afraid of? How many scars do they have? What do they think about dinosaurs? The answers are  illuminating, and reflect back onto ourselves in the audience; there's the character you wish you could be (the fabulously throaty Mechthild Grossman), and the character you fear you are (the fragile Helena Pikon, or histrionic flake Julie Shanahan). There are loud outbursts of angst, gentle social dances, magic tricks, dignified farewells and a tender solo for Pikon in a sprinkler shower. The total effect is something so absorbing that the interval, 100 minutes in, comes as something of a disappointment.

Bausch fans will need little convincing to pack the Sadler's auditorium out; if you haven't yet experienced the work of the great German choreographer then 1980 is an ideal place to start.