Uncover Rivers Of London With Cityread In April 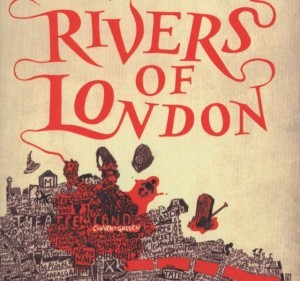 Cityread is about to return, and it's bigger and better than ever. One book — for 2015, it's Ben Aaronovitch's Rivers of London — will dominate the city throughout April, with all kinds of cool events.

For starters, Ben Aaronovitch is visiting a library in every single London borough (including the City) to chat about the novel, which sees a young Metropolitan police officer team up with the last wizard in England to solve supernatural crimes. Rivers of London is the first in a series of adventures, and covers ghosts of Covent Garden to the personifications of London's lost rivers. It's about as Londony as books come, basically.

There are other ways to get involved, too: on weekends, head to Westminster Reference Library and join the new recruits being trained by the Met to solve mystical misdeeds. (Alright, it's actually an immersive theatre performance from group Look Left Look Right, but try and join in the — literal — spirit.) The Museum of London Docklands has a special family day on 2 May where you can learn all about the myths and mysteries of the Thames, or you can enhance your knowledge with an exhibition at City Hall until 17 April.

You should look in on your local library to find out what they're doing in addition to Ben's visits: Manor House in Lewisham, for example, is running a ghost tour with a horror film screening; Redbridge is having a party (with booze); there's an adults-only Punch and Judy show in Chipping Barnet; the history of the River Effra waits to be uncovered in Lambeth; or walk the route of the Neckinger with Tom Bolton.

If you want a free copy of the book, be sure to be in the main piazza of Covent Garden on Good Friday (3 April) between 2pm-4pm. Ben Aaronovitch and the excellent rapper and comedian Doc Brown, accompanied by police cadets, will have 1,000 copies to give away from the back of a 1968 Jaguar. That gives you Easter weekend to wolf down the book and the rest of the month to get involved. You can browse all 100+ events on the Cityread website.