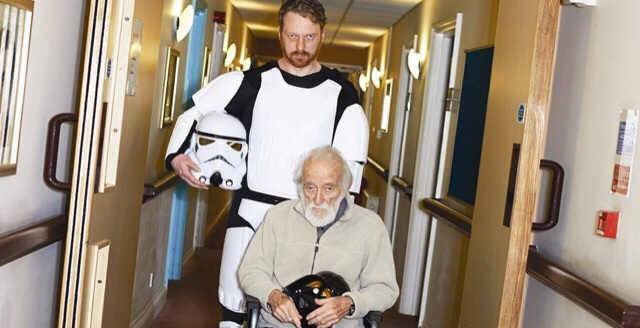 There's a horse outside the theatre.

It won't be long before Kim Noble,  a comedian with quite a hulk of a body, is riding away on it dressed in drag. He's eloped with an audience member, and touchingly they depart hand-in-hand into the drizzle of a Soho night. The rest of us meanwhile, are still inside the building, somehow still watching his show.

This is Through The Looking Glass stuff. Such is the architecture of You're Not Alone that the trance-like state we find ourselves in becomes the normal lens. People who had sat among us are now on stage slow dancing to Chris de Burgh's Lady In Red. Yes, we've been in the hands of a great player of games, arranging his guests like pieces on a chess board.

Remarkably, this spectacle is built on foundations that could have made for an entirely ordinary show. A good one for sure: the covert filming, audio recordings and anonymity of the internet share similarities with, say, Trigger Happy TV or The Timewaster Letters. But Kim Noble has an unswerving commitment to upping the ante and disregarding details such as ethics. He leads us, like a brood of rabbits, down into the hole.

If this means shaping some chicken meat into a passable vagina, then sending the image to a randy trucker he's ensnared into a honey-trap, then so be it. But it's part of Noble's skill that his schemes never smack of cruelty or superficiality. Indeed they barely come across as schemes at all. He's probing the depths of our need to connect to other people however desperate and dangerous that need becomes.

This is a trip into the warped woods of his imagination and the show is unsettling. Melancholia surrounds us like a mist. How can Noble connect to his Dad, whose personality and mind have been drained away by dementia? Don't be surprised to find hot raindrop fat tears rolling down your cheeks here, especially when we see Noble Jnr showering his naked father. Did the comedian exploit an older man who may not have been able to consent to the filming? That's probably a yes. Though what is most apparent here is the love and tenderness between father and son, and exactly the canyon of loss Kim Noble has suffered. "Kim, my blessed boy," as his father greets him in one recording.

Noble's performance recalls the old idea that while drama shows us who we'd like to be, it is comedy that shows us who we are. You're Not Alone is an exploration of loneliness, but also a deliverance from it and how to engage with another person — so it isn't only about the lonely, it is also as exhilarating as love.

You're Not Alone runs at Soho Theatre, Dean Street, until 7 March. Tickets £20. Londonist paid to see this show.