And what better way to celebrate than with a selection of London's most famous, and arguably best, Joes? And Josephs, and a Jo. But no Joans. That would just be taking the piss.

Once named by the NME as the greatest record producer of all time. The tragic tale of Joe Meek is expertly told in the 2008 biopic Telstar: The Joe Meek Story, based on the play of the same name; though it does a fine job celebrating the prolific songwriter-producer's many musical successes, it inevitably focuses on Meek's struggles with homosexuality (illegal during his lifetime), debt and depression. Meek's tale ended with his murder of his landlady, Violet Shenton, in 1967, followed shortly afterwards by his own suicide at his home/studio on Holloway Road. Controversially for Joe Day, he wasn't actually named Joe, but Robert.


The famous painter was born in Maiden Lane at Covent Garden in 1775, and lived in various parts of the capital from Brentford to Chelsea during his life. He travelled extensively and became one of the most famous Romanticist landscape painters in the world, though he intended for his paintings to remain as one collection in London after his death (this didn't happen, which remains contentious among curators and interested parties to this day). By all accounts he was a particularly avid fan of snuff. The J stands for Joseph, in case you hadn't worked that out.

Burn bright and burn hard if you want people to remember you. It's fair to say Joe Orton succeeded in that during his brief career as the writer of plays which scandalised various corners of society during the 1960s; Loot is the most famous, but Funeral Games is arguably a better example of Orton's outrageous wit and deliberate bad taste. Sadly it wasn't only Joe Meek who'd die in grim circumstances in 1967, as Orton was murdered by his soon-to-be-ex-lover Kenneth Halliwell in their flat in Islington.

Schoolboys across the land delighted at calling each other 'Joey' during the 1980s, after this Camberwell-born frequent participant of Blue Peter. With hindsight, belittling a man with cerebral palsy wasn't quite the wheeze it may have seemed at the time. Deacon carried himself with dignity and didn't deserve the reception his appearances on the show led to; in any case he died in 1981, not long after his various appearances on TV. We're not inclined to be holier than thou about things, but Joey — sorry.

Born in Turkey, died in Somerset, claimed by London for most of the bits in between. Decided at a fairly young age that John Mellor was a crap name, and that 'Woody' Mellor wasn't much better as a stage name, and thus Joe Strummer was born. The Clash frontman will forever be linked with the city thanks to London Calling, which is not the best Clash album no matter how many people claim it is, please just stop saying that (it's Give 'Em Enough Rope, obviously).

His solo work after the Clash was pretty solid, as was that with his other band, the Mescaleros. Here's their song Tony Adams, which we promise is only tangentially about the former Arsenal captain.

He may have been or indeed still be a man, but the Joe Allen we know is a restaurant. Some people might suggest this disqualifies it from a list of London's famous Joes, but that's balls, frankly. They do a mean steak in the American style, and side dishes and all sorts. It's very nice. We're definitely not angling for a freebie, not at all. See also: Joe's Southern Kitchen & Bar.

They never met, largely because the former died seven years before the latter was born. But they were both legends in their respective field of science — Banks as a naturalist and botanist who accompanied Captain James Cook on his first great voyage in 1768, and Lister as a surgeon and pioneer of antiseptic surgery. They are in our list as London's scientific representatives. We'd have given them their own entry but, well, would that make for two genuinely interesting entries? A name can only take you so far in the 21st century.


Famous London Joannes and Josephines are suspiciously short on the ground, but one stands out as one of our most enduring comedy stars. Jo Brand was born in Wandsworth, worked in London pubs and as a nurse at two London hospitals, hit the toilet circuit hard as she started her stand-up career and through graft and wit became arguably the most famous female comedian in the country. And that knowing smirk is as arch today as it's ever been.

The famous 'Elephant Man' — not called John, as many believe, but Joseph. Born in 1862 as a child of relatively average features, the first 22 years of Merrick's life were spent in Leicestershire where his body developed abnormally, leading ultimately to his being exhibited as a human curiosity. This happened mostly in the London Hospital, now The Royal London, so we're having him. His skeleton remains there today, along with a small museum dedicated to a man described by a contemporary as 'an interesting and well-educated man'.


Hey, a Joe's a Joe, right? Born Aschel Joseph but known professionally as Young, he was British welterweight champion between 1908 and 1912. Born in Aldgate in 1885, Joseph won his first title in October 1908, beating an army man named Bill Baker at the National Sporting Club in Covent Garden (the pair would meet three more times in the next three years, Joseph winning each time). His shot at the world welterweight title came in 1910, but he was stopped by American Harry Lewis in the 7th round at the Wonderland Boxing Hall in Whitechapel. A few months later he was crowned European welterweight champion after a fight against a Frenchman named Battling La Croix in Paris. Joseph eventually retired in 1914 with a record of 71 wins from 113 fights.

Or 'Blueskin' to his mates and the press of the day, for Blake was a famous highwayman and co-crook of the famous Jack Sheppard. He began his criminal career sometime around 1714, having been introduced to one of London's most infamous gits, Jonathan Wild, and eventually graduated to highway robbery longside Sheppard in the early 1720s. This type of life didn't tend to end well, and Blake met his end at Tyburn in 1724, a few days before Sheppard himself. Having been allowed the customary drink at a pub en route, Blake apparently wouldn't have felt much of a tug on his neck, drunk as he was. 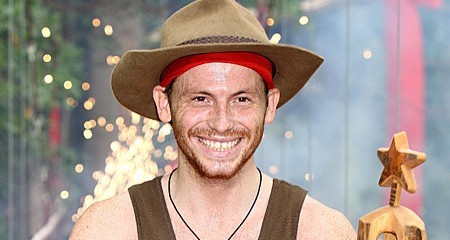