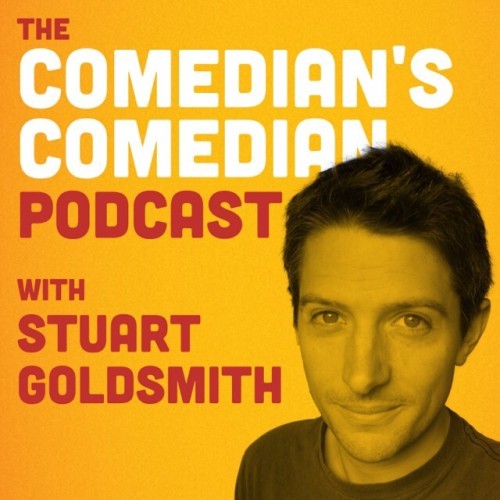 The Comedian's Comedian Podcast is just over three years old, yet having clocked up well over 100 episodes of interviews it's already a rich archive of the contemporary comedy scene. For comedy buffs it actually comes as little surprise to find the ComComPod is now on its way to Soho Theatre.

Host and creator Stu Goldsmith tells Londonist: "The podcast seems to draw people together. Listening to feedback from its fans and comedians, I really do think of it as ‘our thing’.” This is more than mere sentiment on Goldsmith's part — the podcast is powered by listener donations.

The idea came to Goldsmith to record a joke-writing masterclass: “I see myself as a cat burglar, looking at other people’s methods,” but with some of the flavour of sharing a long drive home with a fellow comedian after a gig where, “you’ve both smashed it.”

Early episodes fitting that description include one with Rob Deering where we hear the story of leaving a service station with snacks and wallet still on the roof of the car. Meanwhile, an episode with Adam Bloom feels like a comedy tutorial. Yet the podcast has become much than a convivial joke workshop. Running a trifle longer than most comedy shows it has time to profile all aspects of the comedic world through its artists.

It would take a sublimely dim listener not to learn something from almost every episode: whether it’s Liam Mullone’s perceptive analysis of political comedy or Noel Britten discussing street theatre subcultures across different cities. There’s the isolation of an after-show bus ride home with Luisa Omeilan, or Edinburgh high-jinks with Arthur Smith.

The more episodes there are the more the podcasts seem to massacre any stereotypical myth of the comedian as a ‘sad clown’ or single personality type. As Goldsmith says, "I find it more difficult to say what a comedian is like now. If there is a shared characteristic it's that we all have to do this work. But comedians are as varied as painters or novelists."

This is apparent in their backgrounds too. Some comedians may have started in student theatre (Max and Ivan) or infiltrated student theatre (Tim Key); on the other hand they might be a recovering drug addict (Mike Gunn) or a recovering doctor (Paul Sinha). And if you’ve ever made excuses about your boring office job damning the creative flow, listen to the episode with Sarah Millican: she spent an hour writing jokes each day before 9am.

“It’s completely transformed my career,” says Goldsmith, “And I’m proud that it came from a passion for comedy... It’s like creating a time-capsule. If aliens were able to listen to it they’d know what a comedian does and why.”

Defintiely one for comedy enthusiasts, the Soho run has much to live up to. Though the line-up already looks equal to the challenge with Des Bishop and Nina Conti confirmed for the first two dates.