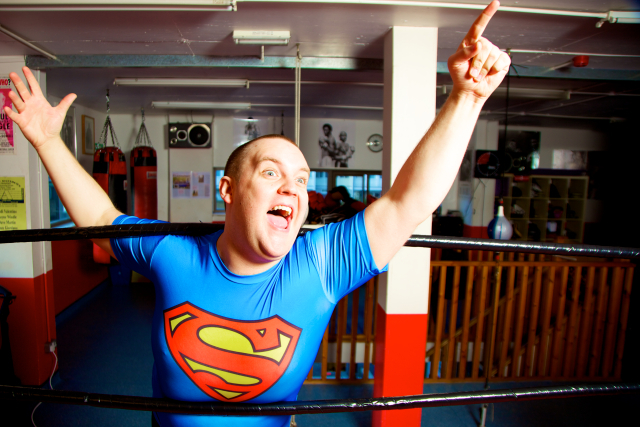 The bottom seems to have dropped out of wrestling: not so big on the telly any more and it never generated a Rocky-style movie franchise. The bottom has nearly dropped out of Daniel Buckley’s sagging leotard in Lardo too, as he plays a naïve Glasgow chub whose dreams, as well as his nuts, get crushed in the ring.

The Old Red Lion has done well to squeeze a wrestling ring into its upstairs room, and the cast twang themselves on the ropes and off the floor with energy and enthusiasm in some smartly-choreographed sport by pro-turned-Mousetrap-actor Henry Devas. You can be so carried away by the exciting effect and borne along by the audience-participation baying for blood you may overlook the fact there’s not much jeopardy in the plot and that the characters are one-dimensional — until Mike Stone’s script suddenly shifts your perception like a wrestler’s detached retina.

Buckley’s a good actor and this is a promising stepping stone between playing wistful boys in musicals like Fresher and Ushers and meatier adult roles. There’s a woman wrestler in this Tartan Army too, foul-mouthed ball-breaking hardliner Whiplash Mary played by Zoe Hunter with groin-kneeing determinism and an impenetrable accent, which felt like a foretaste of Nicola Sturgeon’s bouts with Cameron or Miliband if the SNP holds the balance of power after the May election.

The strength of the Glaswegian accents is occasionally a problem as some good jokes in the script, which highlight the ignorance of the characters, were also lost to the audience, but once our ears were attuned we loved the one about Alexander Fleming inventing paracetamol.

Once you make out what they’re saying, Lardo has some original points to make, in a format you won’t have experienced before.

Lardo continues at the Old Red Lion, Islington until 28 March. Tickets £13.75-£22 from the theatre website. We saw this play on complimentary tickets from Chloe Nelkin Consulting.