The Nether Explores The Darkest Reaches Of The Web 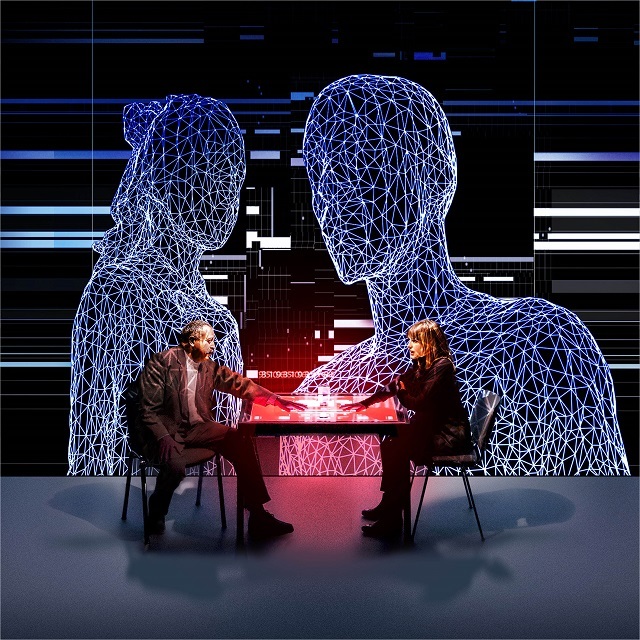 The Nether might be set in a dystopian future, but the ominous toll of its warning bell can be heard loud and clear in our anxious present. With the crimes of Saville and his Yewtree cohorts still raw in our minds, Jennifer Haley's sinister and deeply thought-provoking play about a virtual reality playground for paedophiles is all the more poignant and unsettling. There's no doubt it's an excellent piece of work — just a rather uncomfortable one.

The title refers to what the internet has supposedly evolved into. It is to our present day version of what World Of Warcraft is to Space Invaders: a vast virtual reality world that has replaced much of what we call the 'real world'. Children are educated in virtual schools, workers clock in at virtual offices and, naturally, there is an array of options for virtual visitors in search of more salacious pursuits.

One of these is an idyllic country retreat called The Hideaway. Visitors pay a fee to adopt an avatar of their choosing then enter this dreamy Victorian-era paradise presided over by a genial elder gentleman known as Pops and shared with his several young children. They then have sex with one of the children and, should they feel so inclined, complete the experience by murdering them with an axe.

For those still reading, it's worth pointing out that no violence or abuse actually takes place on stage. But it's still one hell of a dark offering, and pushes the minds of its audience to fill in the disturbing gaps.

The story itself switches back and forth between the virtual world and a police interrogation room in the real world where a detective is building a case to have The Hideaway shut down. Topical issues galore spill out of her interviews. Do you become dangerously detached from reality if you spend too much time gaming? Is it possible to fall in love with someone through an avatar? To what extent should the virtual realm be policed? And, in a very specific sense, does it not make sense for people with such malevolent urges to relieve them in a virtual world where no real children are affected, thereby minimising the chance of them acting on the urges in the real world? Or does the experience just feed their desire?

You'll likely leave this smart, well acted and superbly designed play mulling over all of these issues. Which is no bad thing. Virtual reality is an exciting technology that is on the verge of moving into the mainstream, and The Nether is helping to fuel a more mainstream debate about its power and potential pitfalls.

The Nether runs at the Duke Of York's Theatre until 25 April. Tickets range from £10 to £52.50. Londonist saw this play on a complimentary ticket.