Fitzrovia’s Newman Arms Closed And On The Market 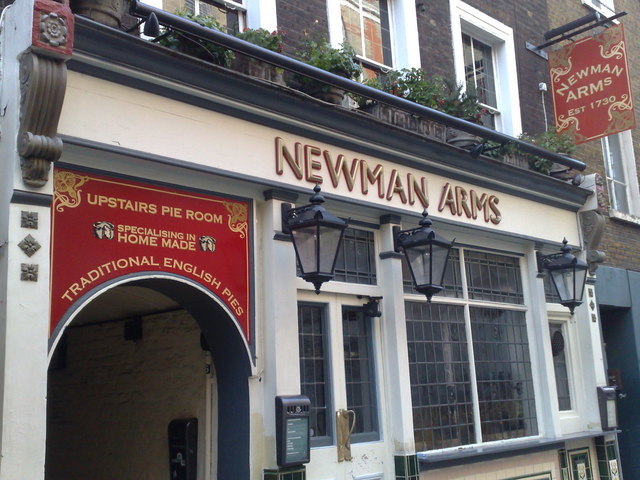 The Newman Arms pub in Fitzrovia — which dates back to 1730 and featured in two of George Orwell’s novels — has shut.

Fitzrovia News reports that it’s been closed since the beginning of the year, while confirmation of a sale to major real estate investment company Shaftesbury has come more recently.

The Rathbone Street boozer was the model for the Proles pub in Nineteen Eighty-Four and also featured in Orwell’s Keep the Aspidistra Flying, making it a popular stop-off on walking tours and literary themed crawls. Dylan Thomas joins Orwell as a past regular, while a little more recently the pub played a starring role in the 1960 thriller Peeping Tom. In present days it’s almost as well known for its upstairs pie room as its literary connections.

The former owners — mother and daughter team Tracey and Amber Bird — placed a notice on the window to announce the closure, as well as their new venture. They will be opening a pub called The Fox Jumps Over The Pie later this year in Stoke Newington, it said, before signing off:

“Thank you and good-pie for now. After 20 wonderful years we’re calling time. Thank you for all the great times and even greater hangovers.”

In a statement, Tracey Bird added:

“We are delighted with everything we have achieved at the Newman Arms, however, we felt that now was the right time to move on to a new challenge...We have had a fabulous time at the Newman Arms and hope the new landlord enjoys serving the wonderful people of Fitzrovia as much as we did."

Who that new landlord will be is still unknown, and will impact greatly the pub’s future. Shaftesbury confirmed to us that it will definitely remain a pub — phew — but that they are currently looking for tenants.

While there’s no doubt that the pub could easily maintain its tangible heritage and loveable atmosphere under new ownership — the Birds themselves are only a short part of the pub’s history — obvious fears are of a takeover by a company which wants to remodel it entirely as a generic gastropub or craft beer bar.

We're not impartial to either of those things in the right location. But in the same few weeks that Centre Point’s Koreatown has been wiped out, we’ve heard that we could soon be losing 187-year-old Simpson’s-in-the-Strand, and Brixton’s railway arches have come under threat, it feels particularly important to maintain London’s historic and characterful drinking and dining establishments. And, please, somebody think about the pies.

For now, take solace in our pick of Fitzrovia’s remaining array of brilliant boozers and London’s oldest restaurants which you can still eat at.

Meanwhile, in other pub preservation news...

... Boris Johnson's latest updates to the London Plan — approved by the London Assembly earlier today — have taken some serious and commendable steps towards protecting the capital's local pubs. The document encourages boroughs to develop policies to ‘protect’ as well as ‘retain, manage and enhance’ public houses.

“The local pub is a great British institution and we should do everything we can to help them thrive in our communities. The Mayor’s commitment to help boroughs protect valued pubs from being lost, where it is possible to do so, is an important one.

"Now London boroughs must take forward these protections into their own local plans, and introduce rigorous market testing and viability tests before any development on pub sites can be considered.”

This London Plan updates have been published following report by O'Connell, Keeping Local, which found London has lost over 400 pubs between 2003-2012.