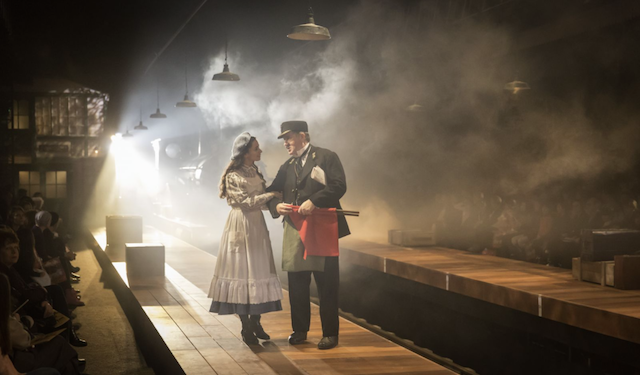 Edith Nesbit’s classic children’s book The Railway Children has stationed itself for a theatrical retelling at a specially-built venue just behind King’s Cross station, and what a venue it is. Before you’ve even entered the theatre space (via the ‘platform’ listed on your ticket — nice touch) you’ll have walked through the bar area, which is decked out like an Edwardian train station waiting room.

As the audience take their seats, ushers are dressed in period costumes and ensemble cast stroll up and down the ‘platform’ (stage) in the centre of the auditorium with cheery nods and waves. The scene is set smartly and much thought has been put into the creation of this world in which headstrong Bobbie (Serena Manteghi), stubborn Peter (Jack Hardwick) and outspoken Phyllis (Louise Calf) live.

The story told here is very faithful to the 1907 book and 1970 film. When the three children learn that their father will be away “for some time” and they must downgrade their privileged London lifestyle for one altogether more simple in rural Yorkshire, they turn to the local railway (and the wonderful Mr Perks, played with heart by Jeremy Swift) for distraction. It’s all very tally-ho and spiffing-good, and existing fans of the show will be pleased to know that all the sweetness and energy of the original tale is very much present.

A bonafide steam train huffing and puffing its way into the auditorium is a really rather special moment — even more so as it creates the steam required for the gut-wrenching “Daddy, my Daddy!” moment. But the set is not without flaws, the floor level stage means that the view of low-level action (such as when the children enter a tunnel) is often obstructed, while the tarpaulin surroundings create more than a bit of a bluster on a windy day (which it was when we visited).

Those without a taste for saccharine sweetness may find this production gives them toothache, but with an incredibly thoughtful approach to scene and sound (you can hear the rumblings of the train in the distance before it arrives), it has managed to transfer the magic of the original tale onto stage. Old fans and young visitors alike will enjoy the classic journey all over again.

The Railway Children is at King’s Cross Theatre (access at the north end of King’s Boulevard) until 3 January 2016. Tickets cost between £25-£49 with 25% off for under 16s. £1 from every ticket sale goes to the Railway Children charity. Londonist saw this show on a complimentary ticket.