Don't tell the Daily Mail, but thousands of immigrants are hiding beneath the streets of Bloomsbury. What's more, they bite. 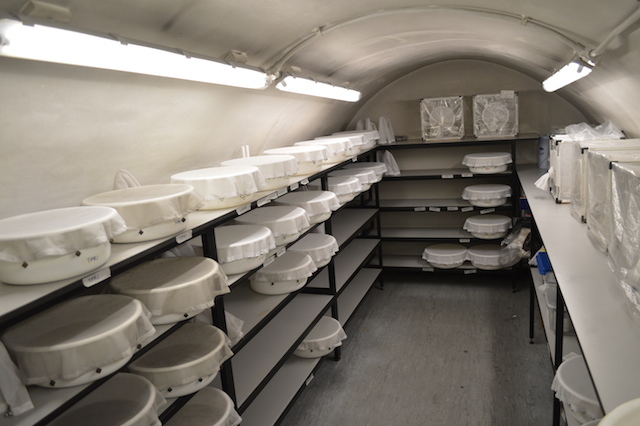 We're inside an insectary at London School of Hygiene and Tropical Medicine. It's warm, it's humid, and there are mosquitos everywhere. If you've ever strolled along the eastern side of Gower Street, then you've walked just inches above this chamber. It's an old coal bunker, and was used as a bomb shelter in the second world war. Today, it shelters mozzies.

This is London's most itch-inducing room. Tiny forms fly and swim in shelf-stowed habitats. Larvae are kept in basins. Here, for example, is a bowl of Toxorhynchites, also known as the elephant mosquito, by virtue of its chunkiness. 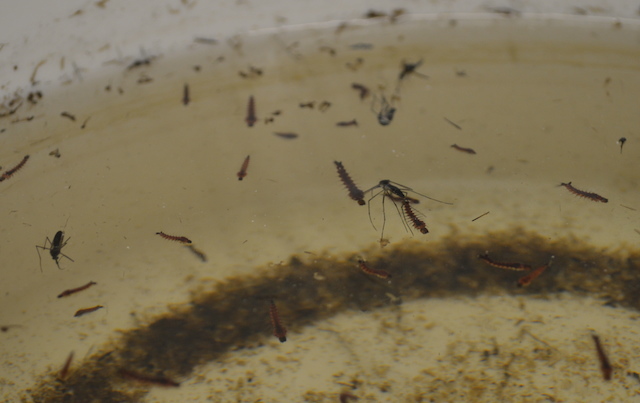 Once the larvae develop into adults, like a couple in the photo above, they're sucked up with a 'bugbuster' — an entomological vacuum cleaner — and deposited into netted boxes. Here are some adult mosquitoes from Tanzania: 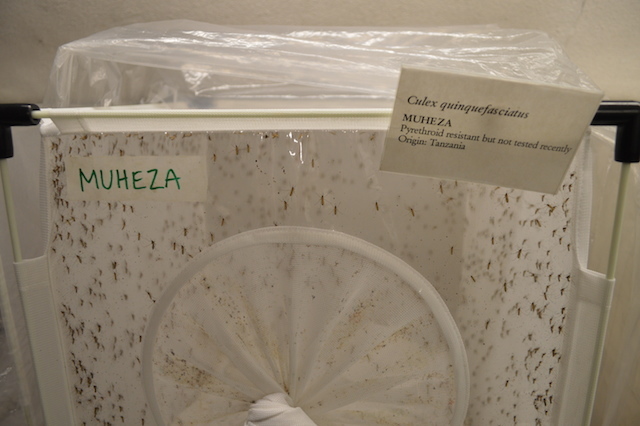 The photo doesn't really do justice to this teeming cube of insects, which bounce with eerie silence around their diaphanous dwelling. "They bite, but they're not infected," explains research technologist Patricia Aiyenuro, who's worked among the insects for over 20 years. She shows no qualms about resting her exposed forearm on top of the meshing.

Mosquitoes, of course, are carriers of malaria, a disease that still kills hundreds of thousands of people every year. The flies in this room might not harbour the parasite, but they're still invaluable for genetic, pharmaceutical and even behavioural research. Why, for example, do mosquitoes pester some people more than others? The insectary looks after dozens of varieties of mozzie to cater for research needs of projects at the School and elsewhere. 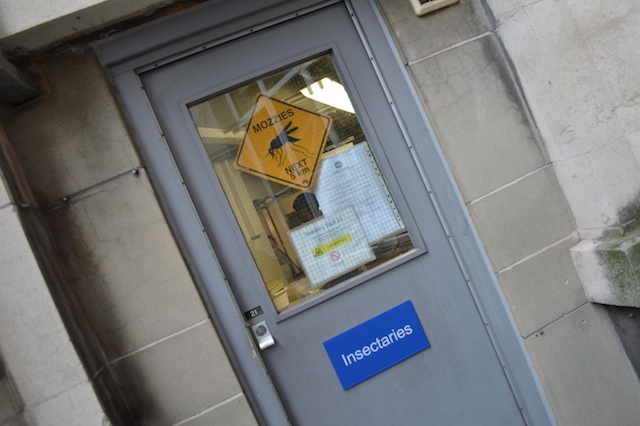 At the start of this piece, we playfully described the mosquitoes as immigrants. They might have originated in Africa or Indonesia, but many of these flies are 500th-generation Londoners. Most of the colonies were collected decades ago; indeed, as far back as the 1930s. They've been happily breeding at the School ever since. Some strains are now genetically unique — their wild-living cousins long ago mutated in response to pesticides.

Here is a family of mosquitoes who lost their freedom in 1947, the same year their home nation gained its independence: 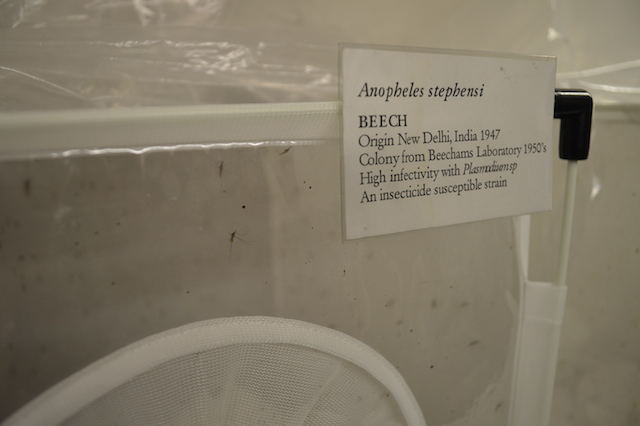 Flies aside, the university also plays a large role in monitoring malaria in humans. Around 3,000 people enter the UK with the disease each year. LSHTM receives blood samples from around two-thirds of those patients, many of whom are seen a few blocks away at University College Hospital. The samples are analysed by researchers at LSHTM's Malaria Reference Laboratory, which monitors the worldwide spread of the disease. Geneticists are also able to determine whether the parasite is mutating. The great fear is that malaria might evolve resistance to the current crop of drugs, reversing progress that has seen worldwide deaths halved since the year 2000 (although some of this is through more effective use of nets). Other researchers are out in the field, gaining knowledge about malaria and helping treat and prevent the disease. All approaches combined, LSHTM reckons to have the largest number of malaria researchers, students and support staff in Europe. 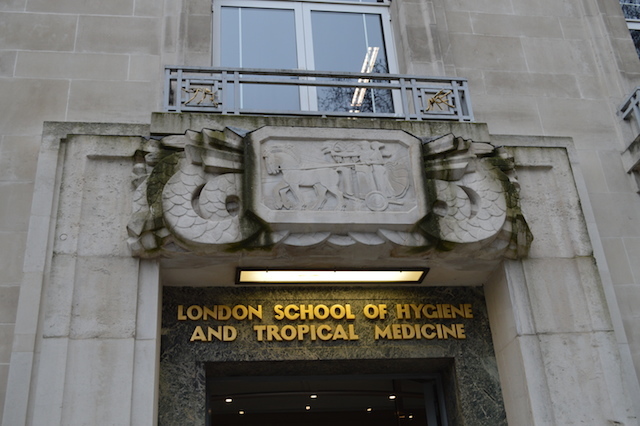 From asbestos to ebola

LSHTM is a world leader in malaria research, but its remit is much broader. It was founded in 1899, when the word 'hygiene' effectively meant 'public health'. That is why the centre still investigates issues seemingly unassociated with either hygiene or tropical medicine, such as eye care, dementia, sexual health, and certain types of cancer. Here you'll also find a leading expert on asbestos, or a lab focused on tuberculosis. One success is the Peek Vision mobile app, which turns an iPhone into a sophisticated yet inexpensive eye examination tool (see this TED talk for the power of this approach).

How to visit the building

The 3,900 students and more than 1,000 staff work in over 100 countries, but the university is centred on a striking Art Deco building between Gower Street and Malet Street. You might have noticed the parade of golden vectors — fleas, mosquitoes, lice, etc. — that decorate the balconies. 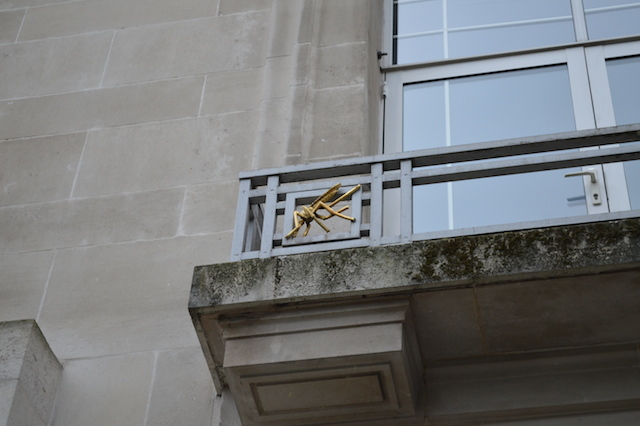 You can take a look around for yourself during Open House weekend every September. A tour includes the gorgeous library rooms, and the more modern atrium areas that nestle within the 1930s complex. 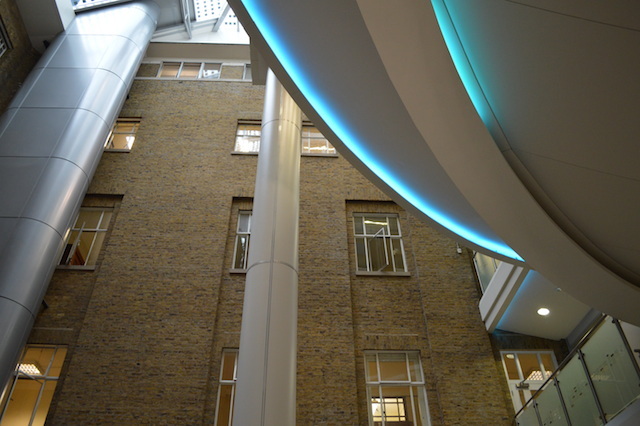 LSHTM also runs regular public events where you can find out more about global health issues and the work of the university. We're itching to return.