Have You Ever Explored London's Silver Vaults?

By M@ Last edited 89 months ago
M@ Have You Ever Explored London's Silver Vaults? 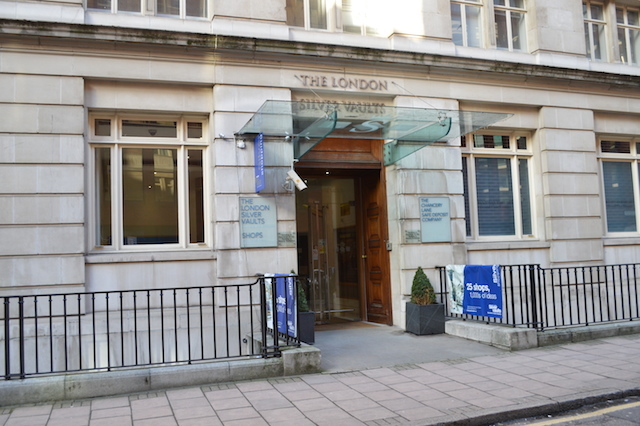 Behind this unassuming door lies the capital's most lustrous catacomb. The London Silver Vaults occupy a sprawling Victorian storage facility beneath Chancery Lane. Not many locals know about this subterranean warren. Still fewer realise that you can simply walk down the stairs and freely browse one of the largest silver markets on Earth.

At first glance, this hypogeal realm looks more like a prison than a marketplace for precious metals. Sturdy iron doors line a long corridor of neutral colours. 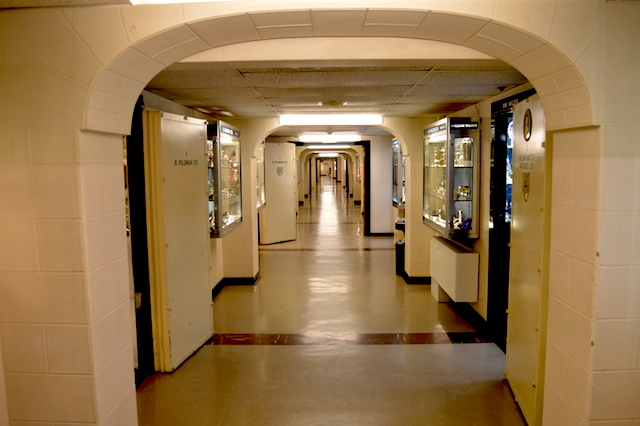 How different is the view a few paces in. Imagine walking along that corridor and turning into the second door on the right, just beyond the cabinet. You might want to put your sunglasses on first. 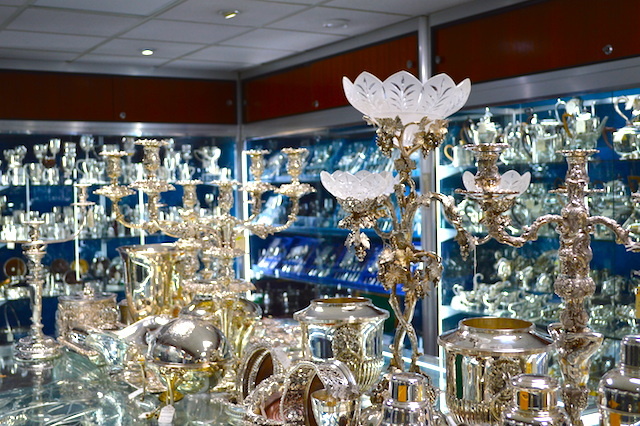 This sparkling shop belongs to John Walter, a third-generation silver merchant. The business was established by his grandfather William Walter in the 1930s. In fact, the majority of shops in this unique arcade are family affairs, handed down through the generations. The silverware in the Walter shop is predominantly Georgian. You can pick up some relatively inexpensive gifts down here, including an antique Christening spoon at £35, silver napkin rings at £40, and argent picture frames for £50. On the other hand, a set of Tudor spoons will cost you tens of thousands.

A few doors along, we wander into Steven Linden's antique homeware and giftware shop. His, too, is a third-generation business, resident in the Silver Vaults for over 40 years. This is the place to come if you're seeking impressive accoutrements for birthdays, weddings or other events. Again, it's not necessarily too spendy, with items starting as low as £20. 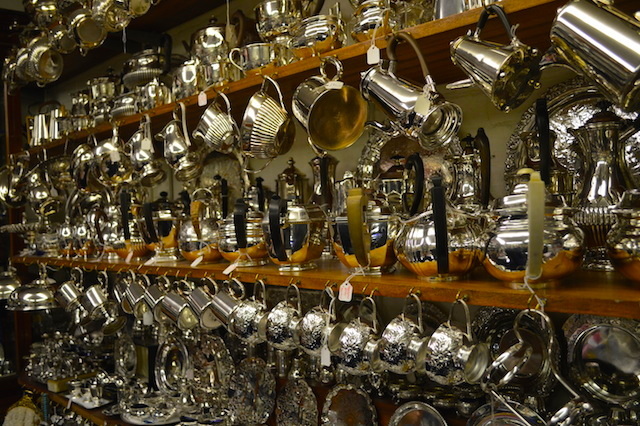 The shop is particularly popular with restaurants and hotels who uphold the principle that good tea should always be poured from silver.

The units down here aren't all concerned with silver. Anthony Green specialises in antique pocket watches, a trade he's been plying for 30 years. He shows us a few Georgian-era timepieces. "The wonderful thing is that most of these would have been manufactured a few hundred feet from here," he says. It's true, nearby Clerkenwell was a world centre of watchmaking during the period. 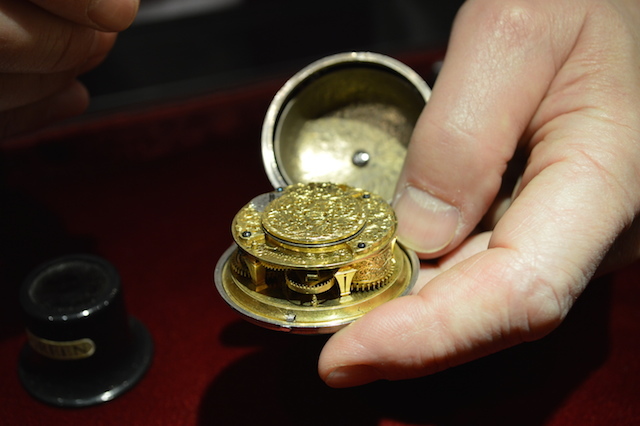 This clockwork masterpiece, built a few streets away 300 years ago, still works perfectly. "The watchmaker would no doubt have been very proud to know that his work lives on and is still appreciated," says Anthony. "Collectors are looking for complexity," he tells us, withdrawing a much larger horological wonder from his sales cabinet. The cumbrous pocket watch contains a fully functional chime of bells, with a different peel for the quarters. You'd swear the warble was digital, from a loudspeaker. But this is a wholly mechanical tintinnabulation; a miniature miracle. 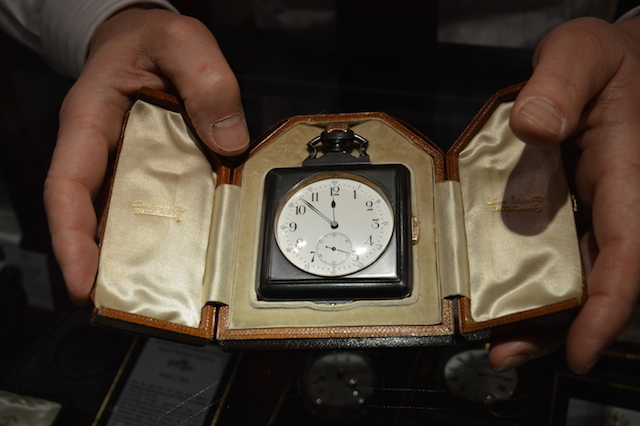 You'll find jewellery shops down here, too. "The high streets are all homogenous," says Alex Belmont of Belmont Jewellers. "Even in Hatton Garden, the shops may look different, but they're basically selling the same stuff." Alex stocks modern jewellery but also has a particularly fine collection of pre-owned and vintage pieces. John Petrook (pictured below) of nearby Wolfe Jewellery specialises in antique items. His family business, now over 50 years old, started in Bond Street, but he's been in the Vaults for 34. He tells us that most of the customers come from overseas, sensing that relatively few Londoners know that the market exists. Which is a shame, because it's a truly astonishing place. "We're like a big family down here," he confides, "although like all families, there are occasional disagreements." 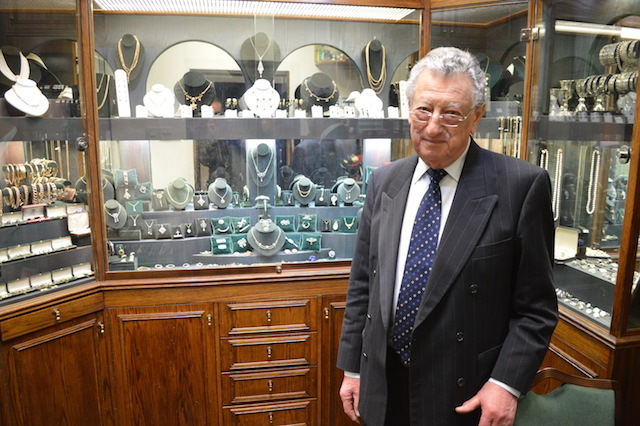 Occasional clashes must be inevitable in a complex that contains so many competing businesses. Yet the atmosphere is supremely friendly, with staff popping in and out of neighbouring units for a quick catch-up, or to exchange materials. Everybody we speak to is intensely enthusiastic about their trade, easy to chat to, and keen to help.

The 30-or-so units are ensconced within small cells, each one protected by a robust iron door. These are as nothing compared to the mighty "John Tann" portal that guards the vault entrance, which we were not permitted to photograph. These are functioning remnants of the vaults' previous incarnation as Britain's first safe deposit building.

Victorians would pay to leave all manner of priceless items in this high-security repository. A press report of 1890, five years after its opening, describes over 6,000 safes, and 3,000 customers. "A number of interesting collections have been placed in the custody of the company, including the Shakespearian documents of the late Mr Halliwell-Phillipps, and some of the valuable State papers in connection with the historic enquiry generally known as the Parnell Commission."

The vaults were never successfully burgled. Indeed, criminals were among the clients. In 1892, the manager of the complex had to write into the Morning Post to play down assertions that the 'Belgrave Square burglar' had hired a safe. "The ordinary renters' security is in no way lessened by the fact that a dishonest person may have his plunder secreted nearby... forty millionnaires and forty thieves may rent safes side by side, both being assured of absolutely invulnerable and secret strongholds."

Having survived a direct hit during the Second World War, the vaults retain their reputation for resilience and security. And yet you can find the most delicate objects within. Kalms Antiques currently holds this beautiful silver ship: 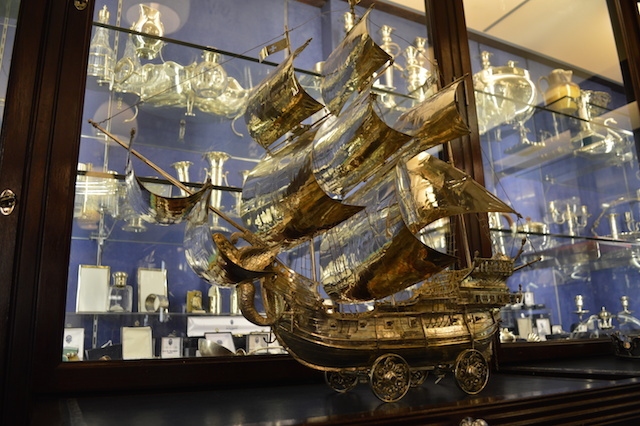 Notice the wheels. These allow the vessel, known as a nef, to be rolled along the tabletop, transporting a cargo of spices or condiments to the assembled diners. It's the poshest salt shaker we've ever seen, but such devices were popular table ornaments in the Renaissance when spices were an expensive commodity. The bigger your nef, the higher your status. This one's a 19th century pastiche from Portugal, but would still fetch almost £30,000.

The Vaults are one of those places that might feel intimidating and off-limits. They're not. To enjoy the silver, you need neither a golden ticket nor much brass. We entered with barely an ingot of interest in precious metal, simply wanting to visit one of London's 'secret catacombs'. We came out with a magpie's glint in the eye.

London Silver Vaults is on the corner of Chancery Lane and Southampton Buildings, open Mon-Fri, 9am to 5.30pm, and Saturday 9am to 1pm. Entrance is free, and you can just walk in.