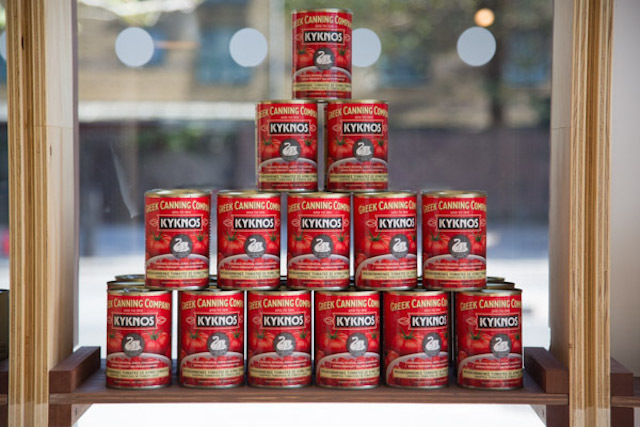 King’s Cross’s expanding and increasingly foodie Granary Square has a Mediterranean feel on a fine day, so it’s apt that The Greek Larder is located nearby, overlooking the Regent’s Canal. Opened three months ago, it’s housed on the ground floor of the architecturally interesting ArtHouse. It’s a large, long space with an all-day restaurant to either side, and the deli (the larder of the name) in the middle. The restaurant’s menu is built around the deli products. As jovial general manager Vasilis Giatsos explains: “The larder is central to the business. We can have the larder without the restaurant, but not the restaurant without the larder. That is why it’s the first thing that you see as soon as you walk in.”

The look is part industrial warehouse-chic, part homage to timber: furniture, floorboards, and produce-laden shelves are all made of different types of wood. There’s an open-view kitchen, and large plate-glass windows wrap around the room. The venue is owned by Athens-born chef, restaurateur and cookbook author Theodore Kyriakou, who established Livebait and The Real Greek back in the 1990s (before selling both), and Panos Manuelides, owner of the premium Odysea Greek food brand. Somewhat cinematically, they met “while fishing under the temple of Poseidon” and spent hours sailing around the Aegean discussing food, when the idea of the deli-restaurant began to take shape. An inspiration is Kyriakou’s father, who himself owned a larder in Greece, and whose black-and-white photo from the 1950s is placed in the restaurant’s homely private dining area. 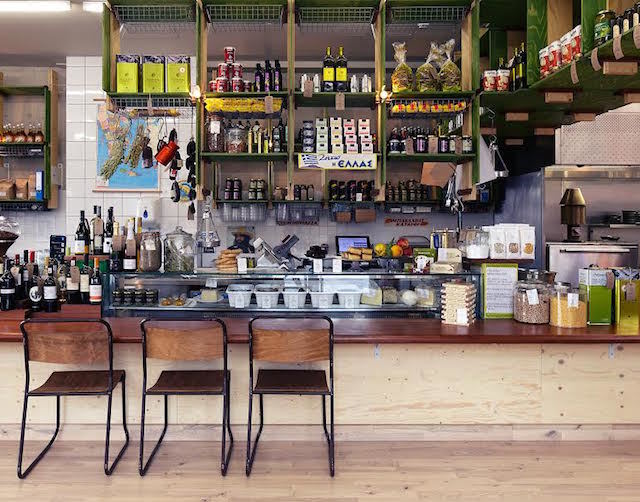 Charcuterie and cheeses take pride of place under a gleaming glass counter; and all around are rustic-chic displays of groceries and drinks from Greece and its islands, plus the Eastern Mediterranean basin. Kyriakou has travelled extensively in the region, hand-selecting items from small, independent producers — many of them barely known. We’re told he's very hands-on: he comes in every day, tastes the products and monitors their quality, often getting involved in the kitchen. If an item runs out, it’s not sneakily replaced by an inferior one; they simply do without. Everything is seasonal: Greek salad, for instance, is currently unavailable because its ingredients are not in season.

Among the charcuterie, of special note are pastourma (spice-coated cured beef shoulder) and syglino (cured, smoked and preserved pork) from Mani. There’s also wild boar kavourma (£12.40/kg) which, together with syglino, is eaten with eggs for breakfast. Pork salami is from Lefkada on Greece’s west coast; and there are fish products such as marinated anchovy fillets (£6.80/jar) and caviar-like bottarga (salted cured fish roe, £28.90/stick) from Messolonghi in western Greece, widely considered to be the best of its kind. 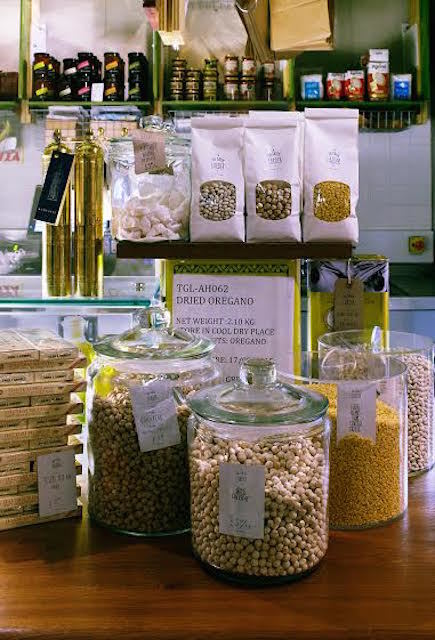 Groceries include beans, lentils, chickpeas and grains in limited edition packages from Gousiaris, each one numbered — a sort of fashionista-style treatment of the humble legume. There are top-quality everyday ingredients such as nuts, capers, fleshy and flavoursome kalamata olives, large moreish green olives, Greek saffron, olive pastes, olive oils, vinegars, and unusual flavoured salts with herbs and spices. You can pair the Great Taste Awards gold-winning Odysea tomata perasti (tomato paste) with hard-to-find Greek pastas that we’re assured “keep their shape in a pasticcio”. Curiosities include various types of leaves in jars: not only vine leaves, but also caper leaves from Santorini and kritame (rock samphire) leaves. 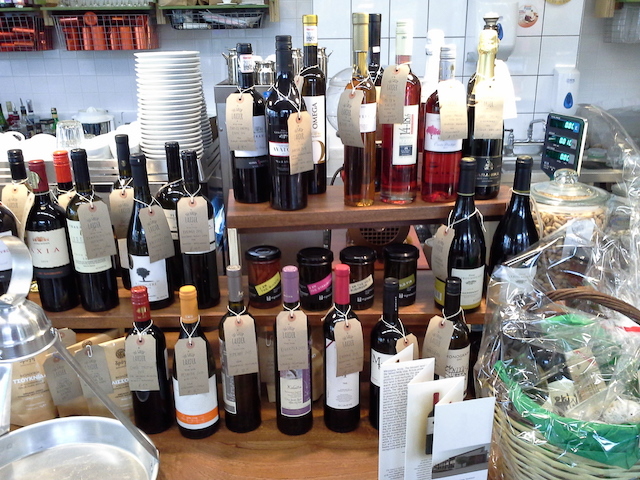 We’re almost knocked off our feet by the heady, pungent fragrance of dried thyme, a completely different beast from the musty supermarket staple; and are blown away by the unique taste of rosemary and lavender loukoumi (Turkish delight). Halva has a wonderfully granular texture, and doesn’t stick to the roof of the mouth; and there are also ‘spoon sweets’, preserves and honeys such as Odysea’s pine, fir tree and wild thyme. Also available are own-made baklava with walnuts, honey and spices (£2/piece), and commercial Greek confectionery such as sesame, honey and orange bars.

Breads are delivered by Elliot’s Café bakery; but kolouri is baked fresh daily on-site. This sesame-encrusted bread, shaped like an over-sized bracelet, here has a lovely sweet-salty taste that’s versatile enough to eat with either cheeses or preserves. The deli also sells a few restaurant dishes, such as htipiti (roasted red pepper and feta dip), and dolmadakia (vine leaves stuffed with rice and herbs); plus there are four varieties of prepared lunchboxes to takeaway. 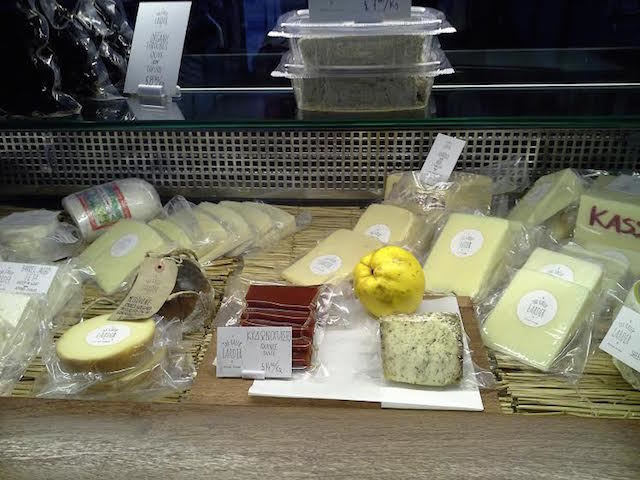 There are drinks, too, such as Greek coffee, and dried dictamnus herb tea from Crete (£27.70/kg). The ever-popular Greek mountain tea — “as Greek as it gets”, says Giatsos — is refreshingly earthy, with pronounced spicy notes (£10.90/kg). Also available are Greek wines “with something to say” from commercial as well as independent producers, chosen to match the food. Try Avaton 2011 (£14.80) from Epanomi in north Greece, a spicy, fruity red; or white Monograph 2013 (£10.75) from Peloponnese. Greek sparkling wines are produced using the same methods as champagne.

Giatsos says that prices are kept as low as possible so as to encourage customers to try and become familiar with Greek products — for which they’ve found a huge demand here in London. Regulars visit three or four times a week. Every item, he says, has a story, and staff would love to answer questions — “the more you ask, the more you get”. Each product that we saw had its origin and region clearly stated; and their own-brand items come in recycled packaging. It’s still early days, so there are plans to introduce many, many more.

Images supplied by the deli.