Not Enough London Nurses Despite Increase In Staff Budgets 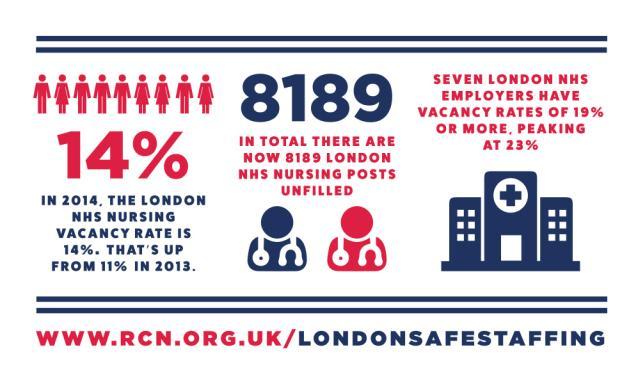 There are about 1,000 more nurses working in London's NHS than a year ago, but there should be many more. 14% of nursing posts are currently vacant — 8,000 in all — and having to be filled with expensive agency staff, according to a report from the Royal College of Nursing (RCN).

Most London NHS trusts have increased the number of nursing posts in their budget since the Francis Report, which reviewed staffing levels in the wake of the Mid Staffordshire scandal. There are nearly 2,500 more nursing positions available in London than in 2013 — but you'll notice we're not saying 2,500 more nurses. That's because NHS trusts are struggling to recruit. Even though all but four London NHS trusts have added nursing posts, nine actually employ fewer nurses than they did last year. Camden and Islington, Croydon, Ealing, Epsom and St Helier, Hounslow and Richmond, Royal Brompton and Harefield, South London and Maudsley, and South West London and St George's all had nursing vacancy rates of 19% and above as of July 2014.

Why? One, inescapable, reason is a shortage of trained nurses; another is the cost of living in London. Most of the new posts have been created at pay rate 'band five', which starts at £21,478. The RCN reports some trusts not being able to find a single suitable candidate for advertised roles, which leads to recruitment abroad or high spending on agency staff (53% of London RCN members who work in mental health said their shifts used agency workers every day, which means inexperienced staff on wards, lack of continuity for patients and more pressure on permanent nurses). The RCN recommends ending the pay freeze, providing more support for nurses from overseas to help them settle in and better long term strategic planning to avoid problems like this in future.