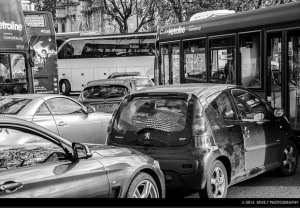 London Mayor Boris Johnson has said that he will consider car-free Sundays for the capital.

Despite previously refusing to consider temporary bans on cars to improve air quality, the Mayor has apparently been inspired by a similar scheme during his visit to the Indonesian capital of Jakarta.

At the same time, new research from Clean Air London estimates that by 2020 the number of Londoners dying prematurely from air pollution will rise to 6,851 per year. Around 4,300 deaths each year are caused by air pollution at the moment.

The Green Party believe the Mayor's Ultra Low Emission Zone (ULEZ) planned for 2020 doesn't go far enough, calling for measures such as bringing its introduction forward to 2018 and extending it to surrounding boroughs. The party also want traffic restricted to essential vehicles on certain roads.

London previously had an annual traffic-free day, dubbed VIP (Very Important Pedestrians) Day in the west end for Christmas shoppers, but this was scrapped in 2013. TfL figures (PDF) have shown declining car use over the last few years and increased congestion charges are likely to deter some motorists. A car-free day would undoubtedly be popular, but it's worth remembering that the Mayor also recently called for delivery drones to reduce congestion in London.

Photo by Mike T in the Londonist Flickr pool.