’Tis Christmas, and time wethinks to quaff merrily on some fine seasonal brews. This Yuletide, London's breweries have produced a veritable Thames-worth of liquid cockle-warmers. Here are the ones we'll be slurping this December.

There aren't that many proper, proper Christmas beer names this year. One of the exceptions is One Mile End′s Rudolf Rocker. It's a Simcoe hopped, Christmas spiced American brown, coming in at 5.7% ABV. Head brewer Simon McCabe informs us it's "named after a Whitechapel resident of the same name; an anarcho syndicalist [who was] a decent guy with decent values, for the most part, and well worth a tip of the hat". Rudolf Rocker is available at the White Hart brew pub this very instant.

By The Horns has fully embraced Christmas, producing a festive stout, Jolly's Revenge, which is gently spiced with ginger, cinnamon, chilli and cloves, with a roasted coffee body (we've tried it and it's gorgeous). It's available in bottles only — keep your peepers peeled for it in reputable beer shops and pubs (especially those around Wandsworth). 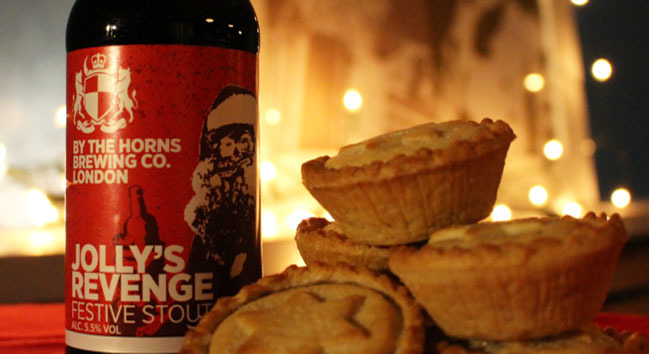 "To celebrate our 100th brew we have made a double IPA called Megawatt (Electric IPA's big brother) and will be bottling it in 660ml bottles with a unique label based on the spiritual candles you see in Brixton Market. The beer itself is around 8% and is hopped with Topaz, Mosaic and Chinook and will be a nice hoppy imperial IPA. The bottle will have a bright orange cap to signify a candle flame."

Croydon brewery The Cronx have produced Happy Cronxmas, a spiced winter ale with orange peel, vanilla and festive spices. Get it in bottles from the brewery's website.

Clarkshaws' offering is Cthulhu Christmas Ale. It's a golden brew made with lots of crystal malt and Pioneer hops (a new UK variety) lending it a spicy blackcurrant flavour. The beer's out already, and will be used for many a toast at Clarkshaws' Christmas double-header party at their Dulwich brewery on 6 and 7 December. Otherwise, sniff it out south of the river in joints including The Royal Albert in New Cross and the Dog and Bell in Deptford.

The final London brewery to qualify for our proper, proper Christmas London beer category is East London Brewing Company (ELB). It's come up with East India Spice Christmas Ale, a toothsome 5% brew spiced with cinnamon, nutmeg, vanilla and black pepper. It is, we're assured, "Christmas in a glass!" Extra kudos to ELB staff, who were stirring up batches of mulled beer in Spitalfields at the weekend. That's right, wine, you're not the only boozy bevvy that works hot.

We've observed that London brewers are generally FAR too hip to make mention of Santa, snowmen, reindeer or anything else Xmassy in their beers. In fact, when we suggested to one brewery that they swerve the cheesy pun conundrum by calling their beer 'Snow Pun Intended', they replied with, "That was like a punch in the gut." After that, we reasoned you don't HAVE to hammer home the Christmas message on your label. So here's a run-down of the other seasonal batches London's breweries have concocted.


Let's start with some rebels. Beer Mile brewers Fourpure are bucking the dark beer trend, plumping for an antipodean take on the festive ale. It’s called Southern Latitude, and is a 4.7% south pacific pale ale loaded with Australian Galaxy and Topaz hops. Dan from the brewery explains:

"Our brew team is international and we’re always reminded that Christmas is a beach affair in some parts of the world, so we launched this as a down-under Christmas beer."

You'll find Southern Latitude on keg in plenty of craft beer drinkeries, including The Understudy on the South Bank, Brewdog in Clapham and The Finborough Arms in Kensington. It's also been bottled for sale in outlets such as Bottledog and Sourced Market at St Pancras International. 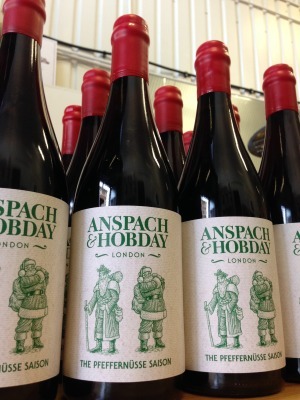 The only Christmas saison we've found this year comes courtesy of Bermondsey's Anspach & Hobday. It's called The Pfeffernüsse Saison, and is inspired by the Danish/German biscuit pfeffernüsse (nope, us neither). Made with pepper, cinnamon, ginger, clove and cardamom, it's a crisp, light-bodied drink — although at 7.5%, it packs a punch too.

And sticking with Bermondsey brewers — Partizan's winter beer is a fairly traditional Trappist-style Dubbel, brewed with Rochefort yeast. They've then jazzed it up with almond, nutmeg and vanilla. Sounds delicious, and there's a tasty label to boot (see picture below). 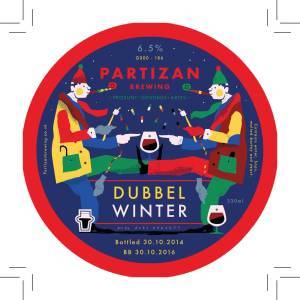 Big boys Fuller's don’t have a Christmas beer as such, but they have just launched their 2014 Vintage Ale. Spokesperson Georgina Wald tells us:

"We have produced a Vintage Ale for the last 18 years and it always uses the best of that year’s crop of hops and malt. This year, we have used British hops for bittering — Target, Challenger and Northdown — and some American hops to add aroma. The beer is described as having a dense palate of marmalade flavours and toasted almonds, with tropical fruits and coconut coming through on the nose."

We highly recommend the next time you're in a Fuller's pub to eschew the London Pride and see if they've got a bottle of Vintage lurking in the back of the fridge. 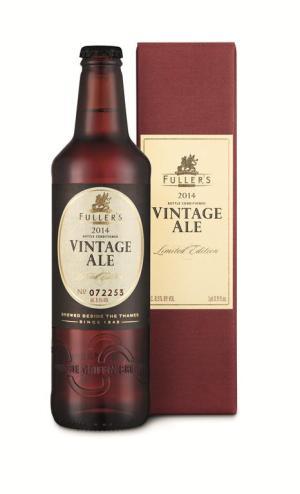 While we're talking about the big boys, Meantime are launching TWO limited edition beers, namely Winter Sun and Cinnamon Porter (these will probably be reasonably widespread, but you'll definitely find them in the Meantime pubs of Greenwich).

Five Points Brewing Company are releasing a seasonal version of their exceptional Railway Porter, called Derailed Porter. It's been aged for six months with Brettanomyces yeast, and is on cask "in some good pubs" (which good pubs, we don't know). We're also reliably informed by Five Points that their Old Greg's Barley Wine is available in decent booze outlets, and the EeBria shop.

Battersea-based Belleville have created a Chestnut Porter. It's a robust American porter brewed using roasted chestnuts and chestnut flour. It can be sourced in various south west London boozers.

Woolwich newcomers Hop Stuff have Gunners Porter — which is dark, rich, coffee-flavoured and clocks in at a stonking 7.4%. In other seasonal porter news, the Brockley Brewery are releasing their 4.3% Porter, which will be regularly stocked at The Job Centre in Deptford High Street as well as lots of other south London pubs. It comes on draft and in 500ml bottles. London Fields Brewery, meanwhile have re-released their Black Path Porter, which is "named after a historic trading route steeped in legend and protected by an ancient Templar that runs from Walthamstow to Smithfield". So there you go. Hackney Brewery has made a special Chocolate Oatmeal Porter — available on cask in decent pubs around the East End.

Brewhouse and Kitchen Islington were racking their 5.5% winter warmer a couple of days ago. It has maybe the least Christmassy name of all time — Vlad (after erstwhile Islington resident Vladimir Lenin) — and two of those casks will contain spices and orange zest, specially for Christmas. Vlad is VERY limited, available only in the brewpub itself in the week leading up to Christmas Day.

Another small-yet-excellent brewery in the north — London Brewing Co. — have Sweet Old Dog (5.5%), a festive version of their Black Dog porter, which is flavoured with roasted chestnuts and cherries, and chocolate malts as well. It can be enjoyed at The Bull, Highgate or Bohemia N12 in a couple of weeks' time.

Clarence & Fredericks — based in Croydon — aren't mincing their words with their festive brew. It's simply called Barley Wine, and is an 8.2% elixir with a fruity aroma, an initial taste of pear drops, followed by a bitterness and a solid malt flavour. Only 25 casks are available, and some have already been cracked open at the brewery tap. 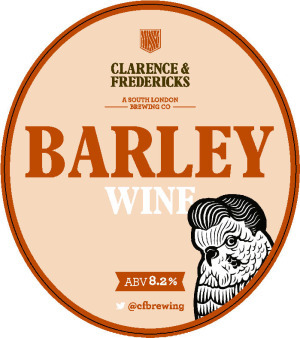 Another brewer who's decided to keep the name of his beer simple is Peter from Head in a Hat. Though the name is straightforward, the recipe is something special — it's called Sloe Gin and is crafted with the gin-infused sloes that have already been used to make sloe gin by the City of London Distillery.

Leaf is the unassuming name of the new Orbit Beers festive brew, which they're describing as "Strong, rich and full-bodied. Essentially a smoked beer." Leaf comes in at 6.2% is already available at a number of places, including The Birdcage and North Pole N1 (a fitting venue indeed).

If we've missed a Christmas/seasonal London-brewed beer, let us know in the comments. And, if during your Xmas London booze-ups, you find an exceptional (or not so great) festive beer from further afield — we'd like to hear about that too.