Ever noticed this fancypants fountain on Finsbury Square? 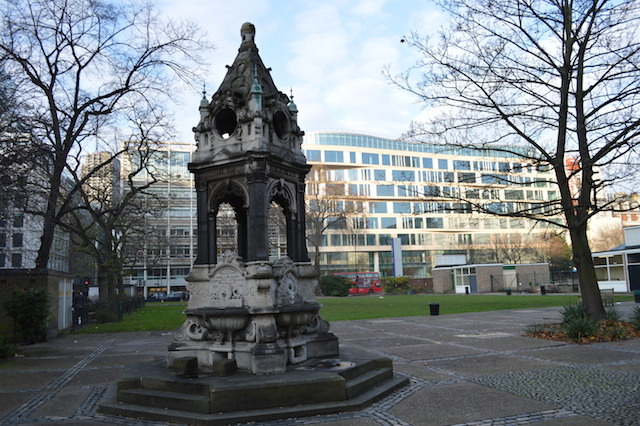 Walking past each day, we like to imagine the architect's inner monologue: "Shall I make a Gothic fountain? Hmm, or maybe I'll go Baroque? How about both at the same time... Yes! I'll call it Goroque. And, hell, while I'm at it, let's build the bastard in the shape of a Jules Verne rocket ship. Woooosh!"

(We've long wanted to climb through those little roof holes and pretend we're sitting inside a cack-spattered, syringe-lined Apollo capsule.)

It's entirely appropriate that the ostentatious fountain should be a confection of architectural styles, for it was erected by the sons of sweet manufacturer and inventor of the Christmas cracker, Tom Smith.

Smith opened a confectionary shop in Goswell Road sometime around 1840. During a sugary reconnaissance trip to Paris, he got all wobbly-kneed over French-style bon-bons, little sweets with twisted ends, much like this modern-day sweetmeat:

In a series of intellectual leaps, the like of which this city has rarely seen, Smith decided to scale up the packaging, fill the cavity with mottos, love messages, jokes and novelty gifts, and eventually to evict the sweet. "Multitudinous, ingenious, and dainty... likely to extend his fame in connection with such elegant trifles," wrote one enchanted reviewer.

The enclosure of a fun-sized explosive completed the appeal, and Smith took out a patent in 1847. Marketed as cosaques or cossaques, the public soon dubbed them crackers, and they've been a mildly annoying mainstay of the festive season ever since.

Alas, Tom died in 1869, but the business was carried on by his sons Walter, Martin and Tom. It is Walter you can blame for those flimsy paper crowns we still enjoy to this day.

Heady with success, the company shifted operations to a larger premises at 65-69 Wilson Street, near Finsbury Square. (We reckon his factory was on the site of the new office complex diagonally opposite the Blueberry pub.)

It was soon pumping out dozens of different lines of cracker to appeal to different types of people. Advertised variations included "Tit-bits crackers", "New Jewel Crackers", the puzzling "Matrimonial Agency Crackers" and one African-themed brand whose name we would find highly offensive today. A press report in December 1881 describes other products:

"One large firm in Finsbury has this year imported a thousand gross of whimsical little articles from Japan, all of them of a size to be stowed away in the body of ordinary-sized cracker. There is the usual explosion, and then, instead of the familiar sugarplum, there is discovered a tiny glass case with a flower blossoming in a flower pot, or there is a little tea-kettle."

The same report mentions that the company paid handsomely for witty mottos or seasonal poetry, even getting into copyright disputes over the material. Oh what cheer such an investment might bring today, to forever banish the tired old demi-jokes that taint the modern cracker.

Business didn't always go with a bang. Disaster struck in March 1889 when a fire broke out in the factory. It must have been a percussive conflagration indeed, crackling and popping as boxes of bangers took flame. Two buildings were gutted, their roofs caved-in and the floors collapsed. The damage was estimated in the thousands of pounds.

The company was soon back on its feet. Nine months later, a journalist was invited round to witness its pre-Christmas operation. Walter Smith led the tour. We like to imagine him sporting one of his ridiculous paper crowns, though this is not confirmed. He boasts of a thriving firm employing 2,000 people, including 400 female hands.

The factory was producing 112,000 boxes of crackers in a year-round operation to build up stock for Christmas, but also to make crackers for other occasions. For some reason, the reporter declines to ask Walter about the recent fire. Instead, his killer journo instincts lead him to press his man on that most vexing of cracker scenarios:

"Sometimes, you know, the much desired explosion doesn't take place at all, and then follows a weariness of spirit on the part of the crest-fallen pair of manipulators, who thus may become targets for the jests of the remainder of the gay and festive throng."

Smith was quick to deflect any blame for this over-articulated shortcoming.

In other words, if it doesn't bang, it's your fault, matey, not ours.

Next time you're passing through Finsbury Square, seek out the fountain. 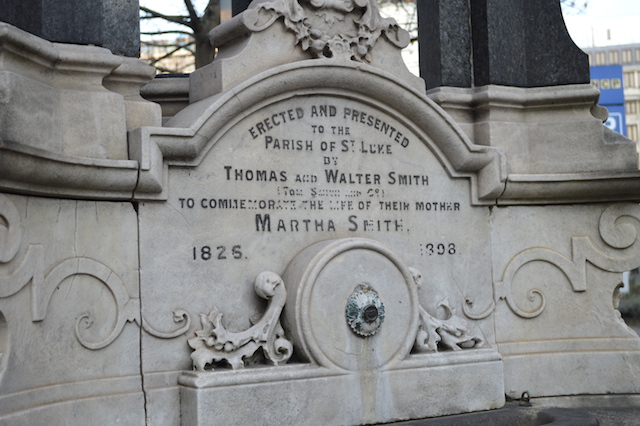 As the dedication shows, it was commissioned by the cracker scions Tom and Walter to commemorate their mother Martha, wife of the original Tom Smith who gave the world its seasonal bang.

The company is still trading today, though it abandoned the Finsbury area in the 1950s. The fountain is a last, vestigial reminder of the area's links to Christmas. We're not sure if it's intentional, but one of the many outlandish design flourishes appears to show a Tom Smith cracker. 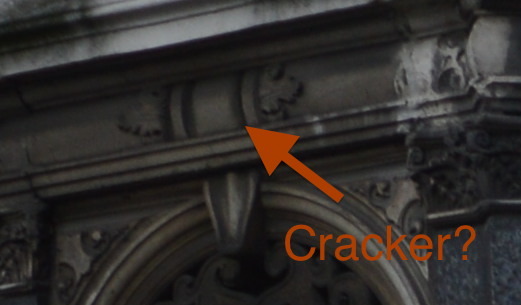 Sources: Like the best crackers, the British Newspaper Archive is full of unexpected treasures. The company website was also useful. All photographs by the author.