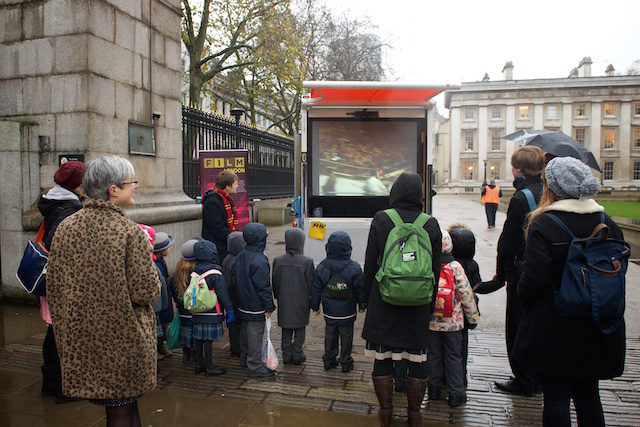 Film London is giving Londoners a chance to see archive footage of the city — by taking a new cinema-in-a-van around 15 London boroughs.

The KinoVan, which launched outside the British Museum today, is similar to those used by councils in the 1920s. The mobile cinema forms part of the three-year London: A Bigger Picture project, put together by London's Screen Archives.

A Bigger Picture seeks to encourage Londoners to enjoy and engage with the city’s rich film heritage. The van will visit boroughs, screening a programme of heritage films in each one, showing how past residents of the area lived and how the city has changed over the years.

Footage featured in the project so far includes scenes from Hounslow, Hackney and Wembley during the 1953 Coronation, festive shots of a frozen Trafalgar Square, and Merton and Morden Auxiliary Fire Service taking part in drills from 1939-1941.

Londoners are encouraged to contribute their own footage. People from Haringey and Barking and Dagenham have already donated family films from the 1950s and 1960s, offering a glimpse of domestic life back then.

The KinoVan is wasting no time in getting started; it appears at the Morden Christmas lights switch-on today, 4-7pm, outside the Merton Council Offices. Follow @Film_London on Twitter to find out where the #KinoVan is next parking up.