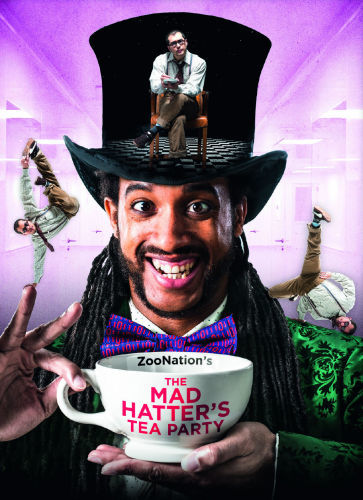 In The Mad Hatter’s Tea Party, Carroll’s timeless characters find themselves at Ladrington Brook, the Institution for Extremely Normal Behaviour. A young psychotherapist (Tommy Franzen) is given the task of curing their neuroses, and they each express their problems through a combination of dance, voiceover and music. Alice is having an identity crisis. The White Rabbit is always late because of his OCD. The Queen of Hearts has anger issues. It’s no wonder Franzen is driven to insanity (and a superb popping solo) as the first act ends.

After the interval, the storyline goes more or less out of the window, as cast members engage in an exuberant tea party complete with dancing on the table and audience participation. Even Royal Ballet resident choreographer Wayne McGregor was dragged from his seat and onto stage when we were there.

The whole show is warm-hearted, feel-good and cleverly crafted by director Kate Prince. There’s plenty of great dancing, with Franzen, Lizzie Gough and Duwane Taylor excelling in particular. Our only small issue is that at times the quality of choreography feels secondary to the narrative (and the characters’ absurdity).

Prince’s attention to detail is remarkable — from the psychotherapy files printed with each character’s name onstage to the entirely redecorated Linbury foyer with riddles to solve around the walls. (What starts with T, ends with T and is filled with T?) The Mad Hatter’s Tea Party is another hit for ZooNation and will appeal to young and old alike this festive season.

The Mad Hatter’s Tea Party is at the Linbury Studio Theatre until 3 January. It’s sold out but a few return tickets are available on the Royal Opera House website. Londonist received a complimentary ticket to review the show.