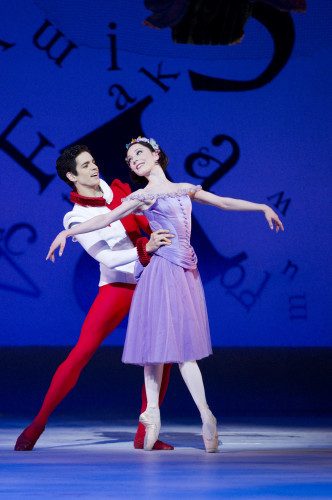 When Alice’s Adventures in Wonderland premiered in 2011, it was the Royal Ballet’s first new full-length work in 16 years. Christopher Wheeldon’s creation was eagerly anticipated and took more than 12 months to complete, but initially gained rather mixed critical reception.

Now in its third season, it has been firmly adopted into the hearts of the Royal Opera House audience, generating enthusiastic gasps, giggles and applause throughout opening night. Indeed it is a spectacle – more of a show than a ballet – filled with quirky and entertaining characters and plenty of excitement.

In the opening scene, we find ourselves outside an idyllic country house, on a Victorian Summer afternoon. Maids carry cakes and genuinely wobbling jellies, placing them on a large table at which guests (who will be seen later in different guises) gather for a garden party. Author Lewis Carroll (Edward Watson) takes a photograph on an old-fashioned camera before being transformed into a pink-sunglasses-wearing white rabbit and encouraging Alice to venture down the rabbit hole that has appeared within his camera bag.

Alice lands in Wonderland, in a room with numerous projected doors which move and change sizes. A ‘drink me’ bottle drops down from above and soon she is crying and is swept into a sea of swimming animals. And so unfold a number of fantastical scenes, such as the Mad Hatter’s tea party, with oversized cakes including a trampoline of a Victoria sponge, and the exotic Caterpillar dance, performed exquisitely by Eric Underwood.

The white rabbit’s curious dress sense is not the only surprise in this production. Our heroine is a notable departure from the character’s usual presentation – a brunette bob replaces the typical golden locks and she wears purple instead of the trademark blue dress and white apron. Later, costumes include everything from tartan pointe shoes to diamond-shaped tutus and turtle-shell backpacks.

These designs by Bob Crowley are both the ballet’s strength and weakness. From the six foot cards that make up the courtroom to the ‘home sweet home’ embroidered house with opening windows and doors, the set and costumes are superb. The Cheshire Cat, a giant collection of moving parts manoeuvred by no less than eight people, is particularly impressive. But the designs overshadow the choreography; they create the magic of Carroll’s story rather than leaving it to the dancing. Joby Talbot’s score similarly shines above the movement. Its twinkly, magical sounds, played expertly by the Royal Opera House orchestra under the baton of David Briskin, are a delight to the ear. 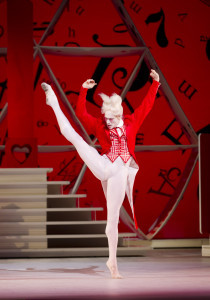 Christopher Wheeldon’s choreography has several wonderful moments but the basic concept of an Alice’s Adventures ballet is flawed. Movement can never replicate the intricate riddles and wordplay of the novel, though Wheeldon makes a clever attempt. The highlight is his commanding Queen of Hearts, performed by the charismatic Zenaida Yanowsky, who dances an hilarious parody of the famous Sleeping Beauty Rose Adage.

The original Alice, Lauren Cuthbertson, has a long-term injury and so was replaced by Sarah Lamb on opening night. This title role is a tough one, with almost no time spent off stage, and Lamb met the challenges with charm but didn’t have Cuthbertson’s dynamism and personality. Leading man Federico Bonelli was also pleasing, though the character has little chance to shine until the closing scenes.

The ballet isn’t one of our favourites but it has undoubtedly played a vital role in the Royal Ballet’s evolution. After 16 years without any new full-length ballets, Alice has prompted a stream of fresh creations – Liam Scarlett’s Hansel and Gretel opens in May and Wheeldon will choreograph A Winter’s Tale for the 2013/14 season. Though Alice’s Adventures in Wonderland is a lot of fun and a great spectacle, it is this which will leave a lasting legacy rather than its choreography.

Alice's Adventures in Wonderland is at the Royal Opera House until 13 April. It is sold out but 67 seats are available on the day of the performance to personal callers at the ROH box office. Click here for more information.