A Christmas Carol That Puts The Hum In Bah Humbug!

By Londonist Last edited 98 months ago
Londonist A Christmas Carol That Puts The Hum In Bah Humbug! ★★★★☆ 4 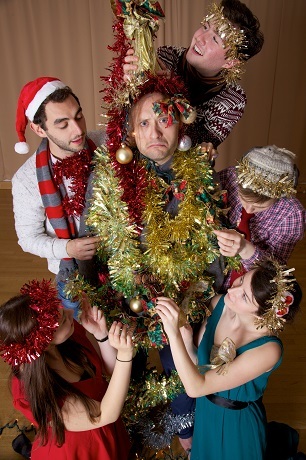 The Old Red Lion Theatre’s new version of A Christmas Carol, directed by Gus Miller, packs a powerful holiday punch. The adaptation by Neil Bartlett is performed by six players, focusing on one man’s journey toward redemption from greed through goodwill, with clever creative departures from Dickens’ original novella.

In very apropos fashion, the show opens with Scrooge looking down upon the needy from his vantage point, standing above his safe (which later becomes his gravestone) while obnoxiously clanking his metaphorical chains of misery. Quickly the mood turns somber and as we progress through scenes of increasing darkness, the tone turns more ominous and creepy. Despite being a tale Christmas about Christmas, it’s all very serious.

The acting is excellent with an expressive cast comprised of Cat Gerrard, Elizabeth Grace-Williams, James Mack, Liam Mansfield and Rhiannon Neads who take on various roles (and clearly enjoy them too). Alexander McMorran as Scrooge is wretched and parsimonious at first, but clearly impressionable as his fear turns to remorse and contrition. The ghost of Marley, wearing the heavy shackles he forged in life, astounds as he returns to warn Scrooge about the impending visits of the ghosts of Christmases Past, Present and Future. Then at the peak of the story, when everyone has literally and physically turned their backs on him, Scrooge sees his body being undressed by lowly grave robbers and mourned by no one.

Instead of using recorded music, the actors employ acapella-like rhythmic chanting to set the scenes and accentuate the passage of time. These eventually morph into carols giving the play a very melodic quality. Intentional pauses by the cast punctuate the dialogue, providing additional narrative space for Scrooge’s thoughts during his many monologues (cleverly a tape player haunts Scrooge by playing back his earlier comments). Impressive lighting choices evoke eerie blue-shadowed nights, so in spite of the customary heat of a theatre over a pub, torch-lights and fog effectively create the sensation of a misty and frigidly cold Christmas.

The contemporary costumes are unfussy and quick changes are pulled off unnoticed. For props, crumpled paper for snowballs and an impressively life-like parrot made of plastic more than suffice as they evoke the humble context in which the story is set. Even the audience’s olfactory senses are stimulated as the ghost of Christmas Present literally showers everyone with Christmas-smelling cheer. While light on humour, the audience is made to laugh towards the end when Scrooge’s face grotesquely contorts and he tries to utter the (uncustomary to him) words: “Merry Christmas”.

The dramatic ending with Scrooge’s change of attitude comes with salary raises to staff and donations to the needy. Fortunately, this production succeeds in convincing us that this misanthrope can take on the rare opportunity to reform and finally honour Christmas in his heart, reminding us all about the true meaning of this time of year.

A Christmas Carol is on at the Old Red Lion Theatre in Islington until 3 January 2015 (with no performances on December 25 or January 1). Tickets cost £14 or £12.50 concessions. Londonist saw this play on a complimentary ticket.