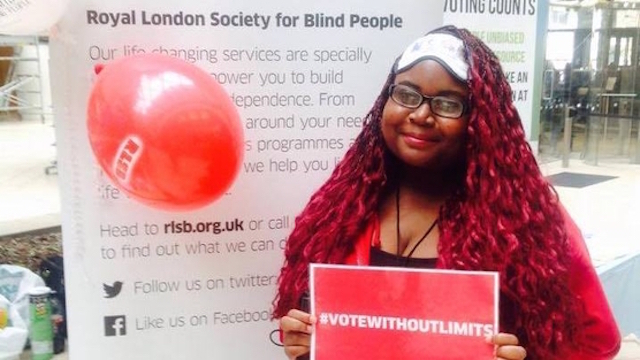 Royal London Society for Blind People (RLSB) has launched a #votewithoutlimits campaign, pushing for online voting to be introduced in time for the 2020 General Election. The online option, says RSLB, will make voting easier for blind and partially-sighted people.

For most of us, election day means a little extra planning to squeeze in a trip to the polling station, but for blind and partially-sighted people, it means relying on someone else, often having to trust whoever assists them to fill in their ballot paper as they wish. A survey carried out by RLSB showed that two thirds of blind and partially-sighted respondents had to give up their right to vote in secret at the May 2014 local and European elections, with many polling stations unequipped to assist voters with sight difficulties, despite their responsibility to do so.

If online voting is approved by the Electoral Commission, it is expected to increase not only the number of blind people voting, but the number of young people voting as a whole: in the 2010 election, only 39% of 18-24 year olds voted overall (compared to 68% of those aged 65+).

RLSB's campaign is echoed by the House of Commons Political and Constitutional Reform Committee, which published a report suggesting online voting would increase voter engagement. A national holiday for election day and reducing the voting age to 16 are among other measures suggested.

#votewithoutlimits campaign was launched as part of Parliament Week this week. You can sign the petition here.