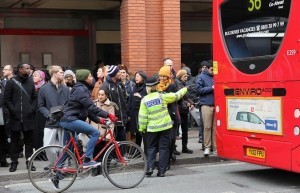 London's commuters will be pleased to learn that next week's planned tube strike has been suspended.

The Rail, Maritime and Transport (RMT) union announced earlier this week that its members would strike for 48 hours next week from 9pm on Tuesday to 8.59pm on Thursday. Talks between the RMT and London Underground (LU) were ongoing this morning. RMT general secretary Mick Cash said:

"Thanks to both the solidarity and determination of our members, and the hard work of our negotiators in the ACAS talks, RMT has been able to secure significant movement in three key areas which have allowed our executive to suspend both the action scheduled for next week and the on-going overtime ban.

"The substantial improvements we have agreed allow us to move forwards but the Union's core opposition to the austerity-led cuts on London Underground has not shifted an inch and we remain vigilant to further developments and their impact."

“I am pleased that Londoners will not have to endure unnecessary strike action next week.

“Although it was not made clear why the RMT called for strike action on Monday evening, we met with them at ACAS yesterday and the good news is that, by providing some basic clarity, the threatened strike and the current overtime ban have now been withdrawn."

Transport for London (TfL) has said that a total of 953 jobs initially planned to go has been reduced to 897, and station staff will get a salary and location guarantee. The strike was suspended following a mutual agreement to continue consultation.