Straight Up Laughs At Guilt And Shame 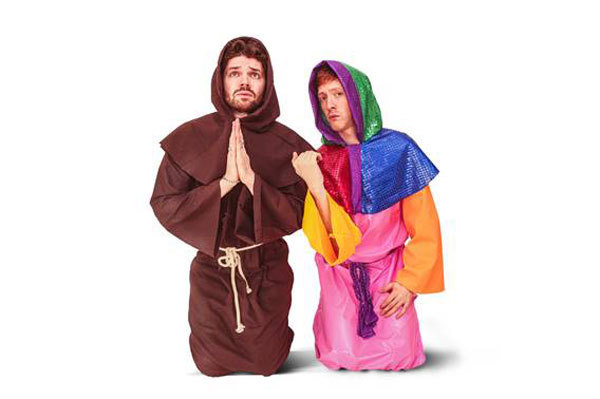 Guilt & Shame is so utterly hilarious that it's actually difficult to write about. As we're reliving the action from Soho Theatre we're laughing too much and losing our train of thought.

The 'depraved comedy duo for every bad decision you've ever made' sees Gabe (Gabriel Bisset-Smith) try to turn his former best mate Rob (Robert Cawsey), straight. What follows is a series of steps, from the Jeremy Clarkson-inspired religion Church of Clarkstianity, that aim to do away with gay-thoughts and feelings — to become a 'real man'. The spectacular failure of this is laugh-out-loud ridiculous, incredibly inventive and sometimes strangely sexy...

At its core, Guilt & Shame is an exceptionally well-written, well thought-out and heart-warming story. The boys' individual sketches blend together with ease, and when they're acting together there are glittering moments of comedy gold. There's simulated sex, guides to chatting up birds, getting 'comfortable around cock' and some magnificent dance moves. The generous amounts of audience participation saw us doing things we never expected to do in front of a room full of people we'd never met (with our clothes on, we'll add, don't get too worried).

Guilt & Shame sledgehammers traditional stereotypes of masculinity and sexuality, making fun in equal measure of what it means to be straight or gay in today's society. This has a very limited run so do whatever you can to get a ticket.