Into The Woods: See It In Walthamstow Before The Film Comes Out

By Johnny Fox Last edited 93 months ago
Johnny Fox Into The Woods: See It In Walthamstow Before The Film Comes Out 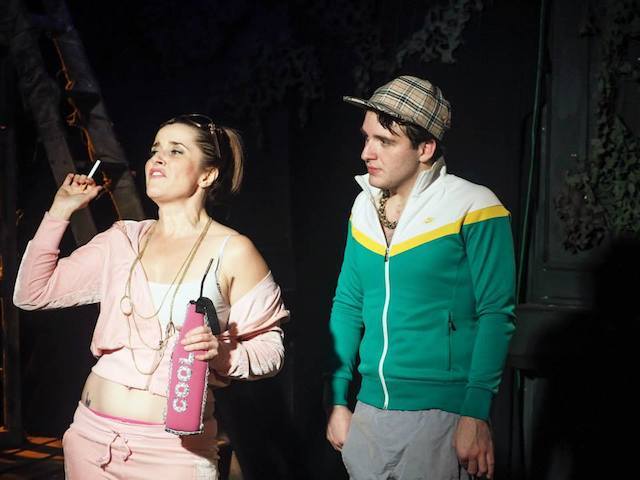 There is a cleverness in both the concept and the execution of Into The Woods that takes All Star Productions into an entirely new category: this must rank as one of the best shows staged at Walthamstow’s Rose and Crowne pub theatre.

Firstly, they abandoned the cardboard cut-out sets and noisy platforms in favour of a floor-level stage strewn with camouflage netting and forest debris in a bucolic and practical design by Gregor Donnelly. It opens up the space for the 17-strong cast to strut about and kick the autumnal leaves to their hearts’ content and tremendous effect.

Secondly, in seizing the opportunity to strike an original interpretative line before Meryl Streep and the Rob Marshall movie re-define the show for ever, director Tim Macarthur has modernised the characters and given them all recognisable personas: Princes from Made in Chelsea; Cinderella's sisters from TOWIE; Rapunzel — a cokehead in the mould of Walthamstow's own famous daughter Danniella Westbrook; and a hilarious Gorbals tenement family for Jack and his thong-wearing had-him-at-14-now-on-the-social mother. Even Little Red Riding Hood also seemed to be channelling Jimmie Krankie in Emma Ralston's cake-guzzling portrayal.

Fortunately at the centre are two very fine and more ‘normal’ perfomances by Paul Hutton and Jo Wickham as the childless Baker and his wife whose all-consuming desire for a baby at any cost should rightly have them interviewed by Jeremy Kyle rather than manipulated by a disguised Witch. Wickham has a great blend of expressive singing voice and comic timing, and Hutton’s Baker has a realistic excellence not seen in this role before and which James Corden may struggle to match in the film.

Although Into The Woods is busy with movement, it does require impeccable singing and MD Aaron Clingham has both tweaked the orchestrations for his five piece band to provide exactly the right support for the unmiked cast, and drilled them to the point at which the diction is as clear as you've ever heard for this show:  you won’t miss a syllable. Among many impressive professional debuts, the baritone of Tim Phelps as Rapunzel’s Prince and the vocal strength of Robert Oliver as the narrator are exemplary, but the singing is generally top quality, particularly the weightless conversational nature of so many of the songs. Stay With Me and No More are done so well here but which have often suffered from over-operatic emphasis in other versions.

"I would have settled for perfection," sings Annie Kirkman’s doughty Cinderella in the second half — well, so would we but there are minor flaws which just rob this show of a five-star accolade. Sondheim often criticises other composers for repetitiveness, but Woods takes any available biscuit for re-cycling the same tunes and phrases: it is in any rendition a long show, but allowing this one to touch three hours feels self-indulgent.

As the witch, Helena Raeburn is glorious in the first half — a tetchy raincoated pensioner with a shopping trolley — but after the transformation, in an unsuitable green sheath, she loses not just her magic powers but also any ability to stand out from the other characters.

It's such a young cast, there's an occasional risk of it feeling like a stunningly good student production. Although we ‘get’ the Scots routine early on, Sarah Waddell as Jack’s Mother punctuates every line with exactly the same gesture of her unlit cigarette, and has nowhere to go with the character, and while Josh Pugh is perfectly posh and camp as Cinderella’s Prince, his Wolf doesn’t have nearly enough animal magnetism or menace.

To ape Sondheim's capacity for repetition — this is a “last chance saloon” opportunity to see an imaginative reinterpretation of Into The Woods. Seize it, the CGI-laden film will be on telly every Christmas until the next millennium anyway.

Into The Woods continues at the Old Rose and Crowne theatre pub until October 31.  Tickets from the venue's website.

Londonist saw this production on a complimentary ticket.