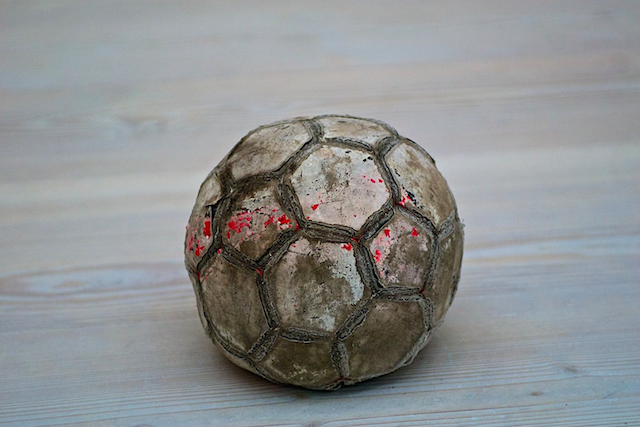 Edward II has been called a great many things. ‘A good sport’ is not one of them.

Exactly 700 years ago, the King was leant upon by merchants to ban football in London. Down came the edict from the Lord Mayor: ruffians in the city were to cease this "great noise... caused by hustling over large balls". The penalty? A suspension to end all suspensions: a stint in one of London’s brutal prisons.

A cruel, hot-tempered game capable of engendering in players and spectators alike the most base, animal passions... and the medieval version wasn’t much better. When he’d called foul play, Edward was taking exception not to a beautiful game akin to modern footy, but to mob football: a "friendly kind of fight... a bloody and murdering practice," as the Puritans would later describe this enduring pastime.

It’s possible that football developed independently on this very isle, as a violent contest all but indistinguishable from provincial warfare. (Imagine a time when ‘London’ meant many rival towns, not yet a unified urban blob). Or it might have been brought over by conquering Roman or Norman soldiers. Either origin would explain the spirit of extreme aggression into which the game was entered.

Most local varieties of football were craftily tagged onto a respectable community gathering or religious event, such as Shrovetide. In the lands we now call London, the sport probably witnessed two hordes of combatants, perhaps entire villages, employing any unbroken limb to scramble, boot, or chuck a pig’s bladder or similar into the opposing horde’s goal — some designated monument at the far end of the village like a church, common, or pond. Physically the game was closer to rugby, but still utterly lawless. Something similar is played to this day in Ashbourne.

Because ‘teams’ numbered hundreds of players, the ‘pitch’ was a network of narrow streets, sometimes miles long. ‘Kit’ might include weaponry, ‘tactics’ might involve burying the ball or simply bludgeoning opposing players, and a match’s death toll could exceed its scoreline. Naturally, these melées were the preserve of thrill-seekers. An 1175 account by William FitzStephen recalls packs of adolescents and workers congregating in London’s streets. Because each man brought his own ball, the ensuing scenes must have been chaotic indeed, with FitzStephen observing keen elder spectators coming down to "relive their own youth vicariously".

The King’s 1314 London ban was Britain’s first, and inspired at least 30 others. Whether it was Edward III encouraging players to switch to archery to stave off the French, Richard II proscribing vulgar ball games generally, or a conflicted Henry VIII hanging up his own football boots (his pair supposedly being the first ever recorded) to instigate his own prohibition.

They didn’t think it was all over

But no ban ever stuck. Well, it’s the people’s game, isn’t it? Into the 17th century and beyond, football was still causing a healthy amount of "disorder and tumult" in London, and for every entry in the Middlesex County Records worrying about this "great affray likely to result in homicides", there was a 100-strong gang of ‘malefactor’ enthusiasts in Ruislip who couldn’t care less.

Quietly, the game was being civilised. That the London Brewers’ Company records of 1421-3 had made reference to a hall booking by a ‘fraternity’ of footballers has been used to suggest that clubs emerged centuries before the development of organised football. In the 1500s, a London teacher called Richard Mulcaster started thinking up rules for what would be a more genteel sport, overseen by an actual referee, with fixed numbers and positions.


There’s little evidence that Mulcaster’s rules — or those pioneered in any footy-mad public school over the following centuries — factored into the auspicious 1863 meeting in a Covent Garden pub in which modern association football was born. But they’d worked to make respectable a not-so-harmless but beloved community tradition, which had sustained friendships and hostilities across the city for centuries. And the day London’s oldest extant professional club Fulham formed in 1879, the collective soul of SW6 must have thrilled at the memory of boisterous Sundays spent walloping the old pig’s bladder at bloomin’ Hammersmith.