Exhibit B: Victim Of Mob Censorship Or Vile History Used As Entertainment?

By James Drury Last edited 93 months ago
James Drury Exhibit B: Victim Of Mob Censorship Or Vile History Used As Entertainment?
Protestors have forced the cancellation of the Barbican's latest show, Exhibit B, which has been branded "racist" by those opposing it.

The withdrawal of the work has polarised opinion — some taking delight at the effectiveness of the protest, while others decry what they feel is censorship by a vocal group of protesters. 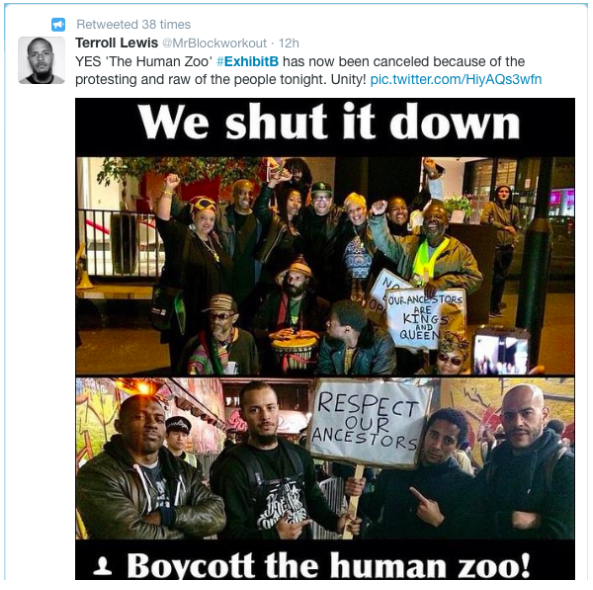 The work by South African artist Brett Bailey was to portray black actors in chains and cages in recreations of the "human zoos" which were an appalling feature of European 19th century history that saw public exhibitions of people, often kidnapped from Africa.

Over 23,000 people signed a petition to have the performance shut down, and many gathered outside the Barbican Centre last night to protest. Police were called, but no arrests were made.

The Barbican says it was the "extreme" nature of these protests that led it to cancel the event.

In a statement, the centre says:

"We find it profoundly troubling that such methods have been used to silence artists and performers and that audiences have been denied the opportunity to see this important work.

"Exhibit B raises, in a serious and responsible manner, issues about racism; it has previously been shown in 12 cities, involved 150 performers and been seen by around 25,000 people with the responses from participants, audiences and critics alike being overwhelmingly positive."

The statement continues: "We believe this piece should be shown in London and are disturbed at the potential implications this silencing of artists and performers has for freedom of expression.”

This is a powerful argument. At what point did London — one of the most proudly cosmopolitan and liberal cities in the world — become a place where we can't have a sensible debate about a horrifying yet true part of European history?

As The Guardian's Lyn Gardner says in her review of the performance when it was staged at Edinburgh in August:

"Confronting us with the appalling realities of Europe's colonial past – the stuff I definitely wasn't taught at school – isn't just some kind of guilt trip. It reminds us that most history is hidden from view; it reminds that Britain's 21st-century ways of seeing are still strongly skewed by 18th-, 19th- and 20th-century colonial attitudes."

And yet, equally compelling, is the argument that exhibitions such as this reinforce negative opinions of black people by dredging up such events and using them voyeuristically.

As Sara Myers, who's behind the Boycott The Human Zoo campaign says:

"Exhibit B recreates, in graphic detail, the lesser known atrocities of colonialism and slavery. Bailey, a white South African, uses black performers to present his fetishized interpretation of the African Holocaust. Images of the exhibition have sent shock waves through the Black community and beyond."

In fact, the actors who performed in the work when it was staged at the Edinburgh Festival responded to criticisms of racism in this article in The Guardian, which is worth reading before coming to a conclusion.

Perhaps more important than the immediate argument, Julia Farrington of the Index on Censorship raises a crucial point in a comment piece that ethnic minorities are not fairly represented by UK arts institutions, whether through a lack of programming or via overwhelmingly white senior management.

It's a point The Barbican concedes. In a previous statement, it says:

"We recognise that the Barbican Centre, in common with many arts organisations, is not represented at both management and Board level by a diversity that reflects London today. We agree that more needs to be done and this is an issue which we are addressing.

"In conclusion, we accept that the presentation of Exhibit B has raised significant issues and undertake to explore these further. But we cannot accept that the views expressed, however strongly felt, should be a reason to cancel the performances.

What do you think? Is this a case of censorship by mob, or a legitimate protest by people who are insulted at their history being used for entertainment? Let us know in the comments below.