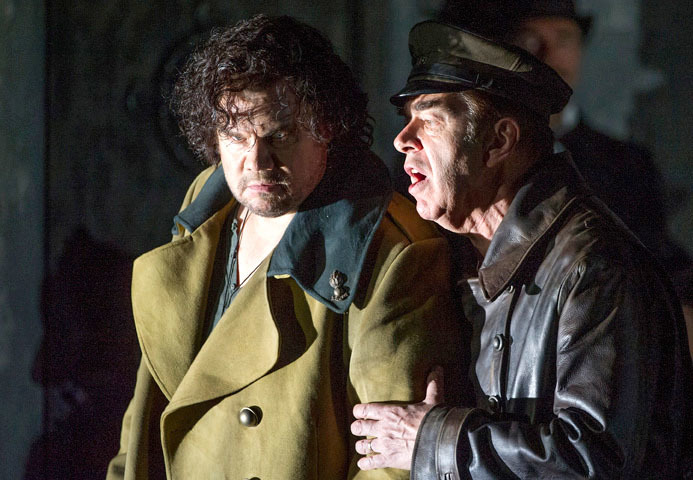 Shakespeare's Othello is the classic tragedy of the outsider, a story of a Moorish military general so insecure about his position in European society that he is easily manipulated into believing his wife has betrayed him with a colleague. Verdi's operatic restaging, first performed almost 300 years after Shakespeare's, skips over the first act and in doing so removes many of the overt racial themes of the source play.

David Alden's new production for ENO follows Verdi's lead; the role of Otello is performed without dark makeup or exotic accent. The result is the beautifully-sung story of a man who flies into a jealous rage for no particular reason, a strange and rather cold premise for the audience to get behind.

Musically, there is much to enjoy about this production. Australian tenor Stuart Skelton is excellent in the title role, singing with clarity and authority from his triumphant entrance to his anguished exit. Baritone Jonathan Summers prowls the stage with menacing conviction, oozing resentment from every pore as he hisses untruths into his master's ear. Leah Crocetto makes a full-voiced if sometimes chilly Desdemona; her first-act duet with Skelton is prettily sung but not overflowing with the emotional chemistry that would make sense of the next three acts.

There are some odd staging choices, too. During Dove guardi splendono raggi, where Desdemona is usually greeted by a crowd of singing well-wishers, the chorus is so far offstage as to be almost inaudible, giving the whole scene an oddly distant quality. At the end of Act 3, where Otello flies into a rage and publically shames Desdemona, the watching crowd responds by shuffling in slow-motion across the stage. Why the crowd, so animated in the first act when commentating on the sea battle and rejoicing in Otello's victory, should now turn into a shambling mass eerily reminiscent of a George A. Romero movie is anybody's guess.

Those who attend opera primarily for the music will find this production enjoyable, even admirable. Those who attend looking for the full dramatic package might well find something lacking here; stripped of its racial and social themes, this is an Otello with a narrative gap at its centre which is hard to overlook.

ENO's Otello is at the London Coliseum, WC2, until 17 October. Tickets £16-£125. Londonist saw this show on a complimentary review ticket. For more information and to book, see the English National Opera website.