10 Oddest Things To Float Down The Thames

Samuel Johnson once remarked that there is, in London, all that life can afford. He might have limited his appraisal to the Thames alone. Over the years anything and everything that might conceivably float has done so on the choppy waters of our city. As Totally Thames 2014 unleashes a giant floating hippo on the capital, we present a buoyant selection of oddities from the river's history.

In July 1818 the denizens of London crowded onto its bridges to watch a singular vessel pass downstream. A gentleman known as Usher the Clown took to the water in "a machine like a washing tub, drawn by four geese". The industrious showman piloted his anserine chariot from Southwark Bridge to Vauxhall. The Gentleman's Magazine continues: "For some time they were quite tractable, and he went on swimmingly, but at times they were quite restless and not easily managed". Usher seems to have been quite an adventurer. Later that year he was advertising himself as The Anti-Combustable Man Salamander, who "dances a pas seul on red hot iron, and a hornpipe in a cauldron of boiling lead". 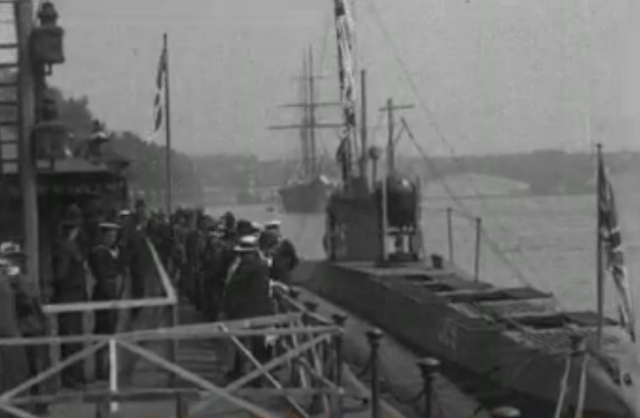 This early submarine was captured in the Thames Estuary at the height of the First World War. It was later towed upriver, and went on show at Temple Pier, as seen in this video from Pathe. Later still, it was shipped across to New York and displayed in Central Park. 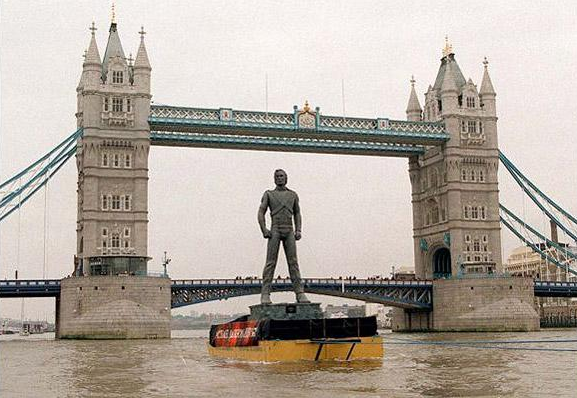 A subtle promotional gesture for Jacko's HIStory album, this 10-metre mega-Mike arrived in London at the height of the Britpop era. Consequently, people of wit remarked that he lives in a house, a very big house, in the country.

Monica Seles and John McEnroe played a mid-river tennis match between London Eye and Tower Bridge, no doubt prompting an infinite number of 'You cannot be serious' headlines. This one was a PR stunt by a credit card, of all things. SE1 website has plenty of photos. A googly of cricketers pulled a similar trick the week before.

Londoners got a taste of Arctic peril when this ursine raft cruised the Thames. The eye-opener, featuring sculptures of a female polar bear and her cub, was billed as an attempt to raise awareness of the melting Arctic ice cap, but was also a PR stunt for a new TV channel. It's not the first time the Thames has witnessed such beasts. In the 13th century a polar bear was kept at the Tower of London.

Sir Peter Viggers's duckhouse became an unlikely symbol of the parliamentary expenses scandal, even spawning a West End play. At the height of the rumble, campaign group Vote for a Change towed a shed-sized replica from Butler's Wharf to Westminster.

National Ice Cream Week is a thing, apparently. To celebrate, Cadbury's took a Land Rover, put some floaty bits underneath, dolled it up like an ice cream van, then drove it into the Thames. Where hardly anyone could reach it. What a tease.

This brobdingnagian inflatable was launched on the Thames to drum up a bit of press coverage for a bingo company. It worked, with headlines ranging from 'What the duck?' to 'Quackers', and not much in-between. Tower Bridge opened to allow passage of the 15 metre-high power-fledgling.

These spheroids of avarice illuminated the Thames to "celebrate the new bigger lotto" (i.e. the price had doubled to £2). Alas, the opportunity to transform Tower Bridge into a monstrous pinball machine was not taken.

To mark the start of Totally Thames 2014, artist Florentijn Hofman navigated a giant model hippopotamus from Greenwich to Nine Elms. Listen to our interview with Florentijn on Londonist Out Loud.

Londonist is proud media partner to Totally Thames. Come to one of our events: Quiz on a Boat,Talks on HMS President.