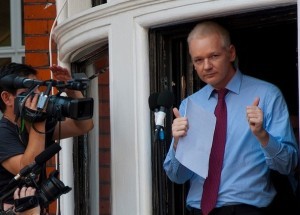 Wikileaks founder Julian Assange has revealed that he will leave the Ecuadorian embassy after two years.

Assange sought asylum in August 2012 to avoid extradition to Sweden, after a warrant was issued against him over alleged sexual assault of two women. Reports have suggested he plans to leave for health reasons, which he denies:

"I am leaving the embassy soon - but perhaps not for the reasons the Murdoch press and Sky News are saying at the moment.

"Being detained in various ways in this country without charge for four years and in this embassy for two years which has no outside area, therefore no sunlight… it is an environment in which any healthy person would find themselves soon enough with certain difficulties."

Last week he lost a legal bid to have the arrest warrant against him cancelled. So if Assange does leave the Ecuadorian embassy, he will face arrest and extradition to Sweden. His claim that he could be subsequently extradited to the US has been dismissed (and let's face it, Britain has never had much of a problem handing people over to the US before).

The Wikileaks founder has not specified when he will leave the embassy, just that it will be 'soon'.

Photo by Andy Thornley in the Londonist Flickr pool.