Go Cornholing At The Barbican 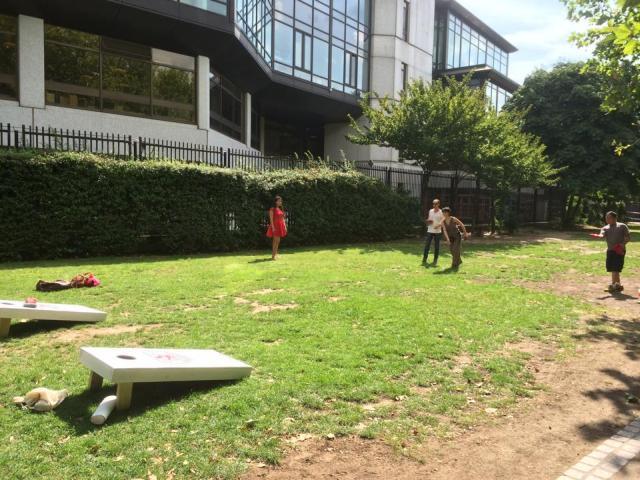 In the mood for a spot of cornholing? Curb your filthier trains of thought: this is a game from America, the goal of which is to wang a bean bag at a board with a hole in it. If the bag lands on the board you get a point; through the hole you get three points. And since points are totted up after all the bags are thrown, you can be devious and try to knock your opponents' bags off the board.

Although the game's been played Stateside since Benjamin Franklin chucked a corn cob at a piece of wood in 1787 [may not be historically accurate], it's recently become popular in the Barbican after boardmaker Jake Bradford donated a set — now known locally as Alabama Cornhole after Jake's origins. "I live at the Barbican," he explains, "and built a board last year and started getting a lot of people interested in the game because anyone can play it and you can participate with a beer in your hand." Sounds good to us.

There's now a tournament scheduled for 13 September at the Barbican. There are a handful of competitive places available (you'll be expected to make a donation to the British Lung Foundation to join in; email Jake to sign up) playing across eight boards, plus another two for spectators to have a go — with or without a beer. If you can't make it on that date, there's always a board available to play on for free if you're passing by.