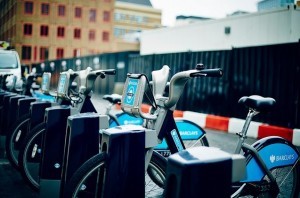 The Barclays Cycle Hire scheme is celebrating its fourth birthday by going free for the weekend of 16-17 August.

Non-members will have free access for 24 hours, including as many rides as you like without having to pay the usual £2 fee, as long as you dock every 30 minutes.

Transport for London (TfL) has also joined forces with British Cycling to offer two central London group rides aimed at helping nervous cyclists build their confidence. The first is the Hyde Park Fantasy Loop on on Saturday 16 August and the second is the women-only Breeze Bike Ride in Regent's Park on Sunday 17 August.

If you're up for either of the the group rides, remember that places are limited and you need to register first at British Cycling's website,goskyride.com/London.

TfL announced in June that it is on the lookout for new sponsors after Barclays declined to renew their sponsorship agreement in 2015. Although use of the scheme has declined, a study conducted by the London School of Hygiene and Tropical Medicine showed that the health benefits of cycle hire outweighed the risks.

Photo by Katie Howey in the Londonist Flickr pool.