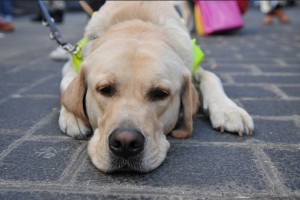 Cyclists who jump red lights at pedestrian crossings or cycle on the pavement are putting the blind and their guide dogs at risk, a survey has revealed.

The survey, by the Guide Dogs organisation, asked London's guide dog owners about their experiences and found out of 33 who responded, 14 had been involved in collisions while 25 had had a near miss. The charity wants cyclists to follow five rules to keep blind pedestrians and their guide dogs safe:

The campaign is supported by Transport for London (TfL) and The London Cycling Campaign. The LCC's Charlie Lloyd said:

"People riding bikes in London have a duty of care to look out for every other road user. Any crash or a close pass which frightens or intimidates a pedestrian is unacceptable. Far worse when that person is blind, partially sighted or in any was less able than we are."

Update: This article has been amended due to previously incorrect figures issued by the Guide Dogs organisation.