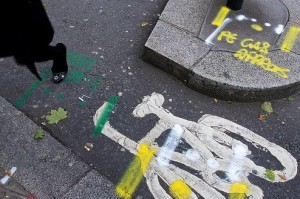 The Metropolitan police have been out in force this morning targeting 166 busy junctions across London as part of Operation Safeway.

The deaths of six cyclists in one 14 day period led to renewed calls for action on road safety, and the Met plan to deploy 2,500 officers at key junctions until Christmas, when the operation will be reviewed. While officers are issuing penalty notices to anyone caught breaking road traffic laws, they're also offering safety advice to all road users — pedestrians, cyclists, motorcyclists and motorists.

London mayor Boris Johnson was criticised last week after suggesting a ban on cyclists wearing headphones. Met Chief Superintendent Glyn Jones also came under fire for saying cyclists needed to take some responsibility for their own safety. Unfortunately, while not necessarily wrong or unreasonable, these kind of comments invariably come in the wake of a fatality which leads to the implication that the victim wasn't sufficiently aware of road safety. Met Superintendent Rob Revill said:

"Our aim is to reduce the appalling number of people who die or are injured on London's roads each year.

"We welcome the recent debate around road safety but it is irrefutable that the Met and the public have a duty to ensure that we all take the very best care on the roads."

Have you been stopped as part of Operation Safeway? Tell us about it in the comments.

Photo by Mark Massey in the Londonist Flickr pool.