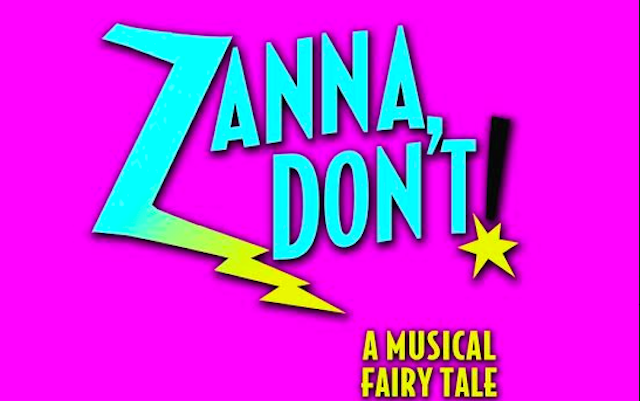 First things first — this vibrant, energetic musical is the campest, gayest and most glitteringly homosexual show you’re ever likely to see. In comparison, Zanna Don’t! makes the Wizard Of Oz, Sound Of Music and Glee look like army recruitment videos.

At the 60-seat Landor Theatre in Clapham you’re always close to the action. With the whole cast on stage at many times during the show, things often seem chaotic and, sometimes, a bit messy — of no fault to the cast — there’s just hardly enough room on stage to swing a sequined cat.

The story follows Zanna, a matchmaker with a magic love wand (no pun intended) who loves nothing more than to set up his friends. But this world has a rainbow twist — everyone in this universe is gay or lesbian. Or at least they think they are…

What starts off as an over-the-top glitter-fueled musical romp with high-camp numbers and plenty of laughs turns into a serious look at love, relationships and the labels that society gives us to define ourselves. Ultimately, Zanna Don’t! shows us that none of that crap matters, and that love is love, whatever the sex of the object of your affection might be.

This is a young cast of actors with the majority having finished their studies a matter of months ago. Overall it has the feeling of a top-quality student production, with the excitement and enthusiasm of the group coming together for some truly sparkling moments. The script is endlessly clever and genuinely laugh-out-loud hilarious throughout. Social satire with a sexual twist.

However, some of the vocals during the musical numbers leave a lot to be desired — especially at the start. We put this down to nerves, as by the end the whole cast were harmonising beautifully. David Ribi’s Zanna is warm, likeable, suitably sexy and sparkly and a strong lead that keeps the story flowing. Ceris Hine is hilarious as Kate, with a character so raw and unique that we lit up whenever she spoke. Liam Christopher Lloyd oozes a charming naivety as Steve and Jennifer Saayeng’s Roberta has a gripping strength and vulnerability — as well as some awesome solo numbers. These are definitely names to look out for in the future.

Zanna Don’t! looks at the serious issue of homophobia and equality through a sugarcoated, diamantine lens — non-conventional, but it works. A camptasticly fun night out.

Zanna Don't! is on at Landor Theatre in Clapham until 19 June. Tickets are £17. Londonist saw this on a complimentary ticket.