London's food market scene continues to grow with the launch of two new weekend markets specialising in local produce and street food. Plus the odd tinny. 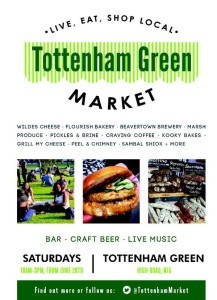 The latter will be run by Beavertown Brewery, who have recently relocated to the area after outgrowing their original De Beauvoir Town premises, and this graphic neatly explains why they’re opting for cans rather than bottles.

Other street food offerings will include grilled cheese toasties from Grill My Cheese, steak sandwiches from Beef & Liberty, chicken satay buns from Sambal Shiok, plus Aji Ceviche, You Doughnut!, and Dalston’s White Rabbit.

In the produce department, you’ll find smoked salmon from Camden Smokery, brownies and cupcakes from Kooky Bakes, breads from Tottenham’s Flourish Craft Bakery and cheeses from N17 micro-dairy Wildes, along with meat, veg and more. The grassy location should be perfect for summertime picnics, too. 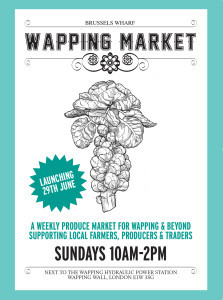 Among the wealth of produce, look out for raw (unpasteurised) milk from Hook & Sons, British meat from Bermondsey’s The Butchery, all manner of pickles from VadaszDeli, sustainably sourced fish from the excellently named Soleshare and smoked mackerel, salmon and more from Little Greenwich Smokery.

Wapping Market will run weekly on Sundays from 10am-2pm next to the Wapping Hydraulic Power Station on Wapping Wall. Follow Wapping Market on twitter

If you head down to either market (or both) at the weekend, do let us know what you think in the comments below. Also, don’t forget that #ModelMarket has just launched in Lewisham, running on Friday and Saturday evenings. See our preview here.