If you’ve not already done so, you can subscribe to these daily listings and have them delivered to your inbox at 7pm each evening, so you have enough time to plan for the day ahead. Alternatively, subscribe to Londonist Daily to hear about events further in the future. And help spread the word to your friends who haven’t discovered us yet!

BLOOD: Today’s opportunities to donate blood are at Islington Town Hall and the usual permanent donor centres in Tooting, Edgware and the West End. See site for terms and conditions.

CITY FESTIVAL: Highlights from the City of London Festival today include a performance by the National Youth Chamber Choir of Great Britain (£15, 7.30pm) and a debate about Who Runs London? (£8, 6pm)

WINSTON CHURCHILL WALK: Take a guided walk through Whitehall and St James’s and learn more about the life of Winston Churchill and how he still influences the House of Commons today. £10/ £7.50, prebook, 10.30am

FORGIVENESS PROJECT: Marina Cantacuzino is at Wiener Library to talk about her charity The Forgiveness Project, a personal project collecting stories of people who have lived through violence, tragedy or injustice and sought forgiveness/reconciliation rather than revenge. Free, prebook, 11.30am

EAST END CHARACTERS: London Jewish Cultural Centre has a guided walk focusing on the heroes and villains of the East End, including the first Jew to win the Victoria Cross and 20th Century Jewish gangsters. £14, prebook, 10.30am

THAMES SWIMMING: Head to Somerset House East Wing for a talk organised by Thames Baths Project about re‐introducing swimming in the Thames. Guest speaker is Chris Romer‐Lee, co‐founder and director of London architects Studio Octopi. Part of the Museum of Water. £3, prebook, 1pm

RAT CAFE: Hot on the heels of Shoreditch's cat cafe comes a pop-up Rat Cafe at London Dungeon. For one day only, try coffee and cake, followed by a chance to get up and close to the furry critters. £5, prebook, from 6.30pm

LONDON ARCHITECTURE: As part of London Festival of Architecture, Bloomsbury Institute has a literary salon. Tom Wilkinson, author of Bricks and Mortals and Tom Campbell, author of The Planner, will be in conversation. £10, prebook, 6.30pm

SPOKEN WORD HISTORY: Apples and Snakes poetry night looks at the history of spoken word, with artists from the '80s to the present each representing a decade. At the Amersham Arms in New Cross. £5/£7.50, prebook, 7pm

CYCLE SPEED DATING: Look Mum No Hands, the cycling cafe in Hackney, has a speed dating event aimed at cyclists aged between 35 and 55. Meet at least ten people during three minute dates and receive your matches afterwards. £15, prebook, 7pm

MUSIC PODCAST LIVE: Camden Roundhouse hosts the first ever live recording of the Complete Music Update podcast. The audience will hear live conversations about the music industry, careers in music and YouTube. From £10, prebook, 7.30pm

Find more London events in our Free & Cheap events listings. Want to see your event in these last-minute listings? Email us at hello@londonist.com at least 48 hours before the event, and we will consider it for inclusion. Note, due to high volumes of email, we can’t always reply.

The Whopping Rainbow Run takes part in Wapping on 3 July in aid of Rainbow Trust children's charity, and there's still time to sign up for the 5km or 1okm route. Registration is £19 (10km) or £17 (5km) and there is a suggested sponsorship of £50 per person. Find out more or sign up here.

A new puzzle begins today. Your first clue is THOR. Don't email guesses in just yet, but have a think about possible themes, and wait for the second clue tomorrow.

Car parks are more than just a place to park your vehicle. They are architectural wonders, from buildings inspired by the double-helical structure of DNA to fictional MI6 lairs. We rounded up the Top 10 Car Parks in London on this day last year.

Pub of the Day

The World Cup is effectively over for England, although they still have to play their third and futile group match this evening (Tuesday). Stay patriotic by visiting The George Inn, the most famous of many fine pubs in Borough. It won't be screening the football, but it will be displaying its usual ye olde charms, pumping out its fine ale, and providing almost infinite drinking space in its many wooden rooms and ample courtyard. Among its many claims to fame: it was the location for the first ever Londonist pub meetup, back in 2005. Find over 230 other recommendations in our Best Pubs in London microsite. 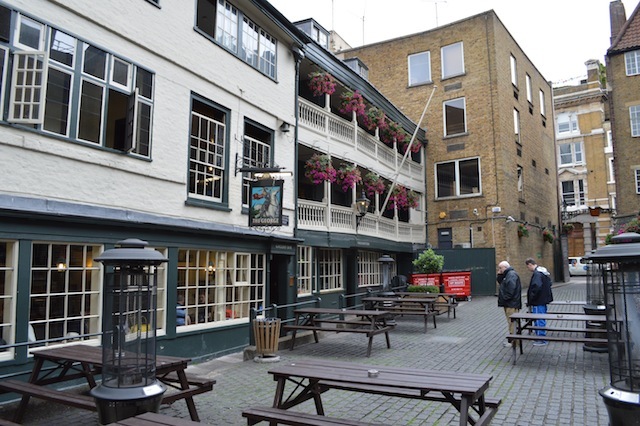