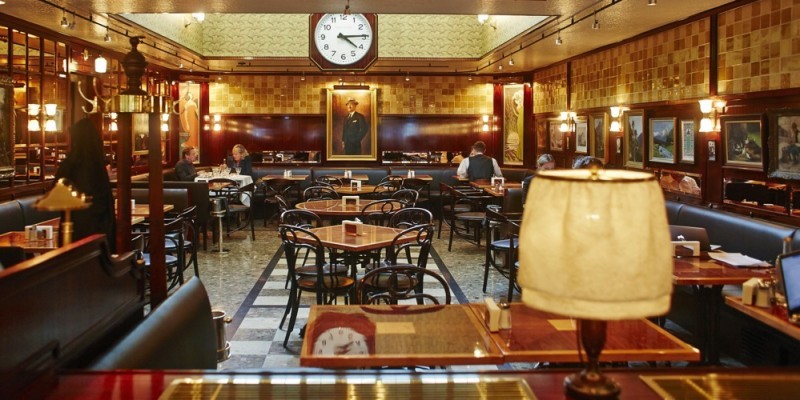 Styled on a grand Viennese café and serving — among many other things — schnitzel and strudels, it would be easy to label Fischer’s an ‘Austrian restaurant’ and plonk it in that pile of places that serve lesser-seen cuisine types; places you might try once for the novelty before reverting to Italian, Spanish or Thai. That would be a mistake, though.

You can get a better feel of what to expect at Marylebone High Street’s newest opening by looking at its lineage rather than its muse. It’s the latest launch from serial restaurateurs Chris Corbin and Jeremy King, a pair who’ve done more for London’s restaurant scene over the years than most. Having launched The Ivy, J Sheekey and Le Caprice, all of which they’ve now sold, they currently run Brasserie Zédel at Piccadilly Circus, Colbert at Sloane Square, The Delaunay at Aldwych and The Wolseley near Green Park.

If you’ve eaten at one or more of these restaurants, the setting of Fischer’s will feel instantly familiar. Yes there are pictures of Austrian landscapes on the wall, Germanic looking portraits, and a stuffed boar's head that would feel very out of place in the other venues, but the fundamentals remain. High ceilings, shiny tiled floors, shinier brass fixtures, large mirrors and plush light fittings give an overwhelming sense of glamour, while neatly-arranged and closely packed tables admirably ensure the space is filled with a convivial buzz. It’s less Austrian, more European.

The menu is where the restaurant’s Austrian identity comes out in force. Aforementioned schnitzels are accompanied by käsespätzle (macaroni-style pasta), würstchen (German-style sausages), goulash and herring in many guises, and probably just about any other Austrian foodstuff that you’ve heard of.

A beef broth starter is elegant in its thin consistency, yet bolshy in its rich, meaty — almost Marmite — flavour. Accompanying cheesy dumplings are just light enough to be considered refined. It’s a simple success, the memory of which lingers. A combination of black pudding and apple (or Himmel und Erde, rather) is similarly comforting in flavour, but more interesting in texture thanks to lightly cooked, caramelised, and raw grated apple that’s assembled around a circle of meltingly soft pudding.

We couldn’t resist but order a schnitzel for mains. You could opt for chicken, but a wiener schnitzel (veal) topped with anchovies, capers and a fried egg feels like the way to do things properly. It’s easier to describe what the resultant dish isn’t than what it is: the meat isn’t dry or overcooked, the breadcrumbed outer isn’t thick and stodgy, and there’s no greasiness whatsoever. Anyone who’s had similar schnitzel experiences to us will find this a very refreshing change indeed. The additional toppings and a spritz of lemon give a bit of much-needed verve to what is otherwise a fairly large, one-tone dish, but we guess that’s the nature of the beast.

Getting to pick your two sausages from a selection of six makes ordering the würstchen instantly more rewarding. The Emmental-filled käsekrainer is fun in its gooeyness and delicious for its hit of garlic, while a thüringer packs a punch of caraway that’s as forceful as its name sounds. Refreshingly tart sauerkraut is a perfect accompaniment, completing a dish that’s substantial and solid rather than standout, but entirely appropriate of its setting.

This is not a place where puddings are an afterthought, and in many ways they trump the mains. An apple bread & butter pudding trickles pleasingly with a punchy calvados custard, while a sweet cherry strudel (the more traditional apple version is also available) is not so over-sugared to lose all the fruit’s pleasant sourness, instead getting a sweet crown in the form of a lightly brûléed crust. We’re not sure how to say that in German.

You’ll eat very well at Fischer’s, without a hiccup in sight even in the restaurant’s early days. And with plenty of mains for not too much over a tenner, it’s certainly reasonable. But the food isn’t the best bit. And nor is the all-European wine list that majors on interesting and affordable bottles from Austria, Germany and their neighbours.

At a time when shabby-chic and scruffy pop-ups are in vogue, restaurant staff are cool rather than courteous, and the merest touch of formality can be seen as the nemesis of on-trend, Corbin and King must be commended for sticking by their guns and creating somewhere that is brilliantly buzzy yet unashamedly classic. At Fischer’s, the service is slick, the waiters are smart and the customer is made to feel special. Throw in some food and drink, and what more could you want?

Hell, there are even white tablecloths. Take that for maverick.