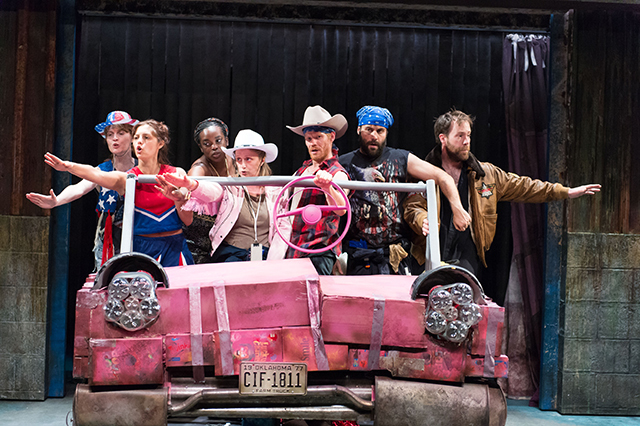 The Simpsons: memorably hilarious when on form, but latterly — by season 25 — a TV show with a reputation for dragging things out rather long. Mr Burns, a play named after the owner of the cartoon town’s nuclear power station, is a love-letter to the programme’s enduring quality, but it too goes on for a jolly long time.

Pioneering a self-styled ‘post-electric’ genre, the play foretells an energy-apocalypse when humans have no power left for their TVs (or anything else), so must resort to memorising and quoting their favourite Simpsons scenes. Over three clever but overwrought scenes, it imagines the gradual enshrining of this and other cultural touchstones of the 21st century in popular myth. It could, says playwright Ann Washburn, just as well have been Friends, Cheers, or Seinfeld — but doubtless Matt Groening’s yellow-skinned people were the most visually iconic.

First is a spartan campfire scene, in which a bunch of survivors huddle and comfort themselves by obsessively retelling the vintage 1993 Simpsons episode Cape Feare. What becomes instantly apparent is that familiarity with the TV programme in general — and, preferably, that episode in particular — is a minimum requirement for any enjoyment of this play.

Skip ahead seven years, and that bunch is now a shambolic theatrical troupe, recreating whole Simpsons shows by buying the rights to ‘lines’ (i.e. quotes) from any old black-market spiv who can remember them. The disaster is seemingly forgotten: there is a television with a candle sitting in it, and nobody seems to speak in proper dialogue or talk about stuff that isn’t running baths or Diet Coke, all of which seems normal in the circumstances.

But all this is actually an inquest into the fidelity and reliability of memory. The Simpsons episodes titles are remembered wrongly — like Heretic Homer instead of Homer the Heretic — and when the company rehearses before us its pop medley, song fragments from Britney to Eminem smash incoherently (and hilariously) into one another.

Did we mention it’s sort of a musical as well? By Act III, which is another 75 years into the future, it’s all song and dance. Like any oral tradition, bits and pieces from that old Simpsons story Cape Feare have by now been half-remembered, confused, glossed, or entirely fabricated — and what we now witness is a barely-recognisable re-enactment of that episode as a cultish ritual, on a lavish set, which veers from Gilbert & Sullivan to a homage to Robert Mitchum’s villain in Night of the Hunter.

Esoteric? Not half. Chaotic? Yes — but that’s the style. The play both comments on, and is reflective of, the frustrating nature of collective and individual recollection. Bart Simpson once said ‘thanks to TV, I can’t remember what happened eight minutes ago’ — but Mr Burns argues for a complementary relationship between pop culture and history and personal memory. At three hours’ length, just be aware that the ‘endlessness’ really is Mr Burns’ watchword.