Fewer People Killed And Seriously Injured On London's Roads In 2013 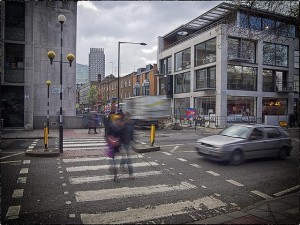 Two fewer people died on London's roads in 2013 (PDF) than in 2012, while the number of people receiving fatal or serious injuries fell 23% year on year.

Six children were killed on the roads in 2013, compared with five in 2012, but KSIs dropped 31% year on year while slight injuries are down 1%. Children are far more likely to be killed or injured as pedestrians, so let's all watch out for kids in the street.

Transport for London puts the fall in KSIs down to its work on road safety. It cites pedestrian countdown at crossings, safety training in schools, work on important junctions and the police's Operation Safeway late last year, enforcing road safety. Leon Daniels, Managing Director of Surface Transport at TfL, said:

"Improving road safety remains a top priority for us and our partners. While there has been a welcome reduction in the number of people killed or seriously injured, there remains an enormous amount of work to do to achieve our long-term goal of removing all such instances from London's roads. "

TfL has also released some borough data. Westminster, unsurprisingly, is the area you're currently most likely to become a casualty, but Lambeth, Barnet, Ealing and Croydon also have bad road safety records. As a pedestrian, after Westminster you're more likely to get knocked down in Lambeth and Ealing than anywhere else in London. The safest boroughs for pedestrians are Sutton and Bexley. Greenwich also seems remarkably safe for cyclists compared to the rest of inner London: there were 77 incidents in 2012, about half that of the next best borough*. Those 77 injuries still represent an increase of 38% over 2012 (did nobody cycle in Greenwich before 2011, or something?). If we judge the amount of cycling by the number of injuries sustained (nasty, but there's a correlation), it's still primarily an inner London activity.

*The City of London seems to be something of an anomaly. Despite being a major centre of work it registers far fewer accidents than the other boroughs. We're putting this down to it being a much smaller area and barely being used at weekends.

Photo by Nigel Bewley from the Londonist Flickr pool