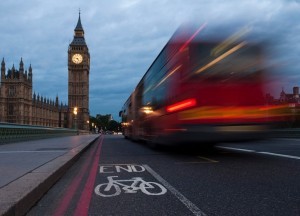 A cyclist was killed in a collision with a lorry in south London this morning.

The man, who hasn't yet been named, was involved in the collision on Parry Street in Vauxhall around 7am. A Tweet from BBC transport correspondent Tom Edwards suggests that another vehicle, a van, might have been involved, but didn't stop. The lorry driver has not been arrested.

Today's fatality is the sixth on London's roads this year. In April, Victor Manuel Ben Rodriguez died following a collision with an HGV at Ludgate Circus and Leon Richards was killed in a hit and run in Clapham. Kevin Lane died after a collision with car in South Woodford in February, and Michael Mason died three weeks after a crash in Regent Street. Last month, Abdelkhalak Lahyani was killed in a collision at Elephant and Castle. Cyclists subsequently staged a protest at the site.

A pedestrian in Streatham was also killed in a collision with a motorbike on Saturday. The man died at the scene and the motorcyclist was taken to hospital. No arrests have been made.

Update: The cyclist has been named as 52 year old Tafsir Butt, a security guard in the City.