Comedy Rockers The Axis Of Awesome Head To Leicester Square 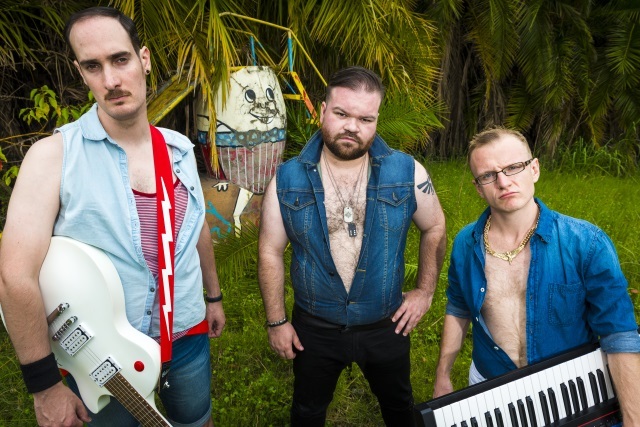 Should 'comedy rock' be allowed to happen? We've witnessed so much pain.

Sure, we allowed Tenacious D to get away with it for a few years, but mostly because the other bloke deserved a bit of fame for putting up with Jack Black's ludicrous antics. Macaulay Culkin's been over here recently with his Pizza Underground 'band', though that hasn't gone down quite so well. And we all know (quite enough) about Chas & Dave.

Now it seems Australia — stunned, as many were, by the success of New Zealand's Flight of the Conchords — is sending us its version of hilarious rock music. On Saturday 13 September the Leicester Square Theatre will be treated to a performance by the Axis of Awesome, and their many amusing parody songs based on popular culture, drinking and whatever else sustains an Australian comedy rock band's career.

The Axis of Awesome are Jordan Raskopoulos, Lee Naimo and Benny Davis and they formed their comedy supergroup in 2006. They have performed at the Edinburgh Festival (they're back again this year as part of their 17-date UK tour), all across Europe, Canada and the US, and various other places between here and New South Wales. They perform original material and covers (and medleys) with comedy twists, and their song titles include The Glorious Epic of Three Men Who Are Awesome and Harry Potter and the Drunk Teenage Animals Escaping from Zoos.

Tapping into the current obsession with everyone's favourite fantasy and fornication epic, here is the Axis of Awesome's video for Rage of Thrones (warning: very strong language).

Their tour and show at Leicester Square is entitled 'Viva La Vida Loca Las Vegas', and it has been praised by various outlets for its energy originality.

And while you may consider this preview to be a little sniffy about an Australian comedy rock trio who, we will admit, do have the ability to raise a smile, we're under no illusions that there's a limited audience for this kind of thing. Their You Tube video for a performance of the Four Chord Song has racked up a staggering 30 million hits so far. And if you click that link you're only making things worse.

The Axis of Awesome play the Leicester Square Theatre on 13 September, and tickets are available at the theatre website.