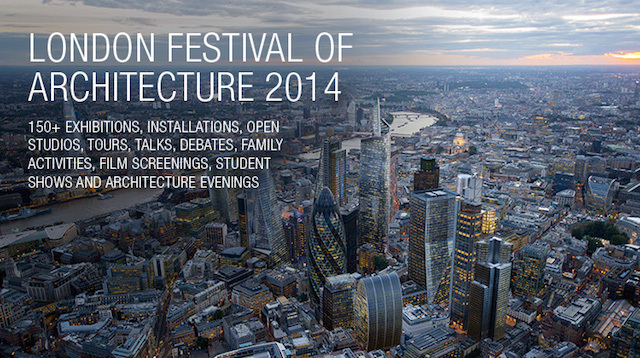 The debate about London's skyline seems to have reached a frenzy over the past couple of months. The headline event (2 June) at this year's London Festival of Architecture asks whether the city needs more tall towers and, if so, how can we make sure they're done right?

Of course, there's far more to London's architecture than skyscrapers. The festival, which runs throughout June, includes plenty of talks, walks, exhibitions and happenings to explore the city's built environment.

For those who enjoy snooping round buildings, tours of some of the city's most famous towers, including Centre Point and The Gherkin have limited places. Or take a look around London-yet-to-come on one of these free building site tours. You can also take a tour of London's ugliest buildings, hop on board an architectural Routemaster trip, or even go on a jogging tour of the Olympic fringes.

The film programme includes the superb How We Used to Live, which splices archive London footage with a memorable soundtrack. Plus another chance to see a chain of films about The Barbican.

Talk highlights include Will Self (9 June) wordily opining his way through the streetscape, plus Yinka Shonibare (2 June), Ian Martin (9 June), Patrick Keiller (16 June) and Lisa Jardine all offering their takes on the city's buildings. Meanwhile, the disarmingly candid Peter Rees (11 June) talks about Christopher Wren, and Thomas Heatherwick, Dan Pearson & Joanna Lumley discuss the Garden Bridge (26 June). This is just the tip of the architectural mast, with dozens of other talks taking place throughout June.

Basically, set aside your Saturday morning to browse through this incredibly packed programme.