A Darkly Comic Antony And Cleopatra At The Globe 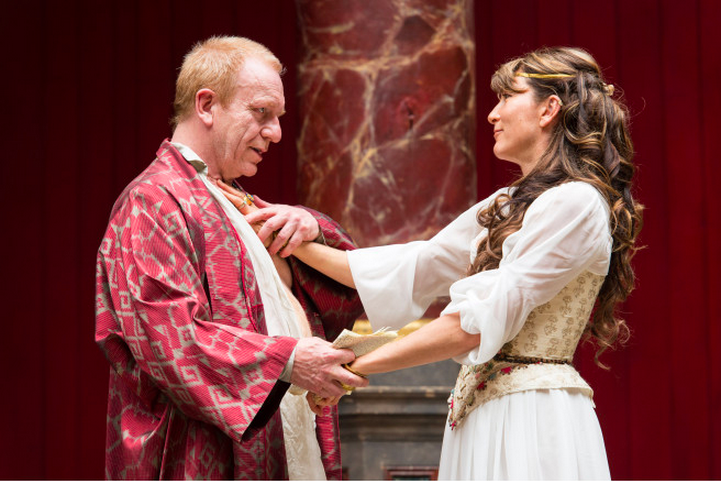 Despite an injury-ravaged run-in, the Globe’s new interpretation of Shakespeare’s middle-aged lust story is an energetic and very often sparkling affair. Eve Best excels as Cleopatra, making clear sense of the many sides of the capricious queen of Egypt. She dovetails the contradictions at the heart of the character with some exuberant innovations of her own – at one point getting down among the groundlings so she can snog a surprised man in the front row. Best’s performance is eminently watchable, by turns elegant, leonine, girlish and cruel. It makes you wish Shakespeare had given her character a bit more stuff to actually do. Antony is played by Clive Wood, who looks a bit like Daniel Craig’s dad and has a similar gritty roughness about him. His robust performance is no mean feat considering he was coming back from a week-long virus before last night’s show. Plaudits must also go to a cast that has rallied round and come up trumps despite other injuries and setbacks.

Wood and Best power the story forward though, at times, it does feel a little weighed down with all the background politicking. Less skulduggery and more of the two leads locking antlers with each other would have been welcome – though again that’s basically a fault of the play’s.

What really makes director Jonathan Munby’s interpretation stand out, however, is the bold, liberal use of black comedy to accentuate the drama. Larking about during death scenes may be a risky strategy but it pays huge dividends here and helps convey the sense that rather than milksop teens, these two grand-standing lovers are international figures who have been there, done that, bought the toga. The scenes in which Cleopatra harangues a messenger boy (Peter Bankolé) who is bringing bad news about Antony are hilariously cruel with the boy’s life hanging in the balance if he trips over the wrong word and displeases the queen.

This is a fine, funny, gripping production that will only go from strength to strength once the teething troubles are over and the cast is back to full health.

Antony and Cleopatra is on at the Globe Theatre until 24 August 2014. Londonist saw this play on a complimentary ticket.