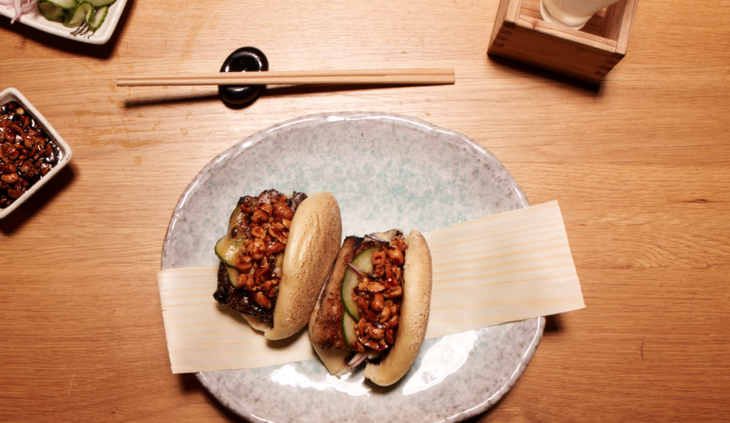 What came first, the restaurant or the pop-up? That’s a hard one to answer in the case of this Japanese near Marble Arch. It’s been in the offing for a while and was originally due to open around October last year, but supposed issues with refurbishment and the council held it up more than six months until its eventual launch last week. Eager not to waste time, the team launched a Kurobuta pop-up on Chelsea’s King’s Road to give a taste of what to expect, it’s now proved so popular that it’s staying put. So, here we have the opening of the original Kurobuta, which is also the second Kurobuta branch in London.

Led by Aussie chef Scott Hallsworth, who has previously held head chef  positions at Nobu restaurants in both London and Melbourne, Kurobuta draws inspiration from traditional Japanese izakayas — a form of tavern where people go to drink but also share plates of food — but has a playful fusion edge. We’d consider it to be somewhere between a Japanese gastropub and a tapas bar.

The space is large and stark, filled primarily with rows of chunky communal wooden tables that bring to mind a Wagamama's. Some cosier booth seats and a large central bar provide the ‘pub’ feel, at least in the way that foreign countries or airport terminals try to replicate proper pubs but can’t quite do it. The ubiquitous hanging lights with filament bulbs, a must-have for any new London restaurant worth its trendy salt, are present and correct.

The menu is pretty similar to the King’s Road branch, split largely between sushi and sashimi, robata barbecue, ‘crunchy’, and ‘junk food Japan’ sections. All plates are served for sharing at the table. We tuck into a selection of sushi by way of a make-shift starter. Salmon and sweet scallop nigiri are a particular treat, generous on fish and laden with extra texture in the form of a spike of deep-fried veg. A soft shell crab maki with kimchi mayo lets the fusion flavours out to play and is all the better for it. Whole battered and crisp crustacean legs have just enough deep-fried grease flavour to be considered comfort food yet manage to retain some of the sushi’s elegance. At least until we try to eat it, but we assure ourselves that (crab) legs akimbo is fine, as it is a pub (of sorts) after all.

Continuing in the same fused vein are wagyu beef sliders from the junk food section of the menu: two mini brioche buns filled with pickled cucumber, crunchy onions and ‘umami mayo’, along with patties made from the luxurious Japanese beef. Served super-rare, the burgers are packed with rich, sexy raw beef flavour, the other ingredients know their rightful place firmly in the background. Given it’s not particularly large, this is one of the pricier dishes at £19 but an utter treat that’s probably worth trying for a cow-enthusiast.

We’re left less convinced by the idea of a tuna sashimi pizza and imagine a fair few long-gone sushi chefs have been karate chopping at their coffins with the mere sound of it. But, honestly, it isn’t all that bad. The name teases, but really it is thick slices of some superb tuna dressed with soy, yuzu, red onions and chillies on a crackerbread-style base. That half of our party of two decided to discard the base all together is telling of its superfluous nature, but the topping is vibrant all the same.

An intricate dessert of Yorkshire rhubarb leans closer to home for its influences, presented wrapped, rolled, stripped and moussed, sprinkled with a little crumble topping. In its look and its delicacy it is sushi-like.

Friendly service (though bizarrely almost entirely Australian from what we could tell) and accessible prices make Kurobuta an attractive mealtime proposition so long as diners don’t expect anything too traditional. We’d also be quick to note that moreish nibbles such as tempura broad beans and a large selection of sake and Japan-styled cocktails make it a perfect pop-in spot for drinks and a bite to eat if you’re bored of the pub. OK, that will never happen, but still…